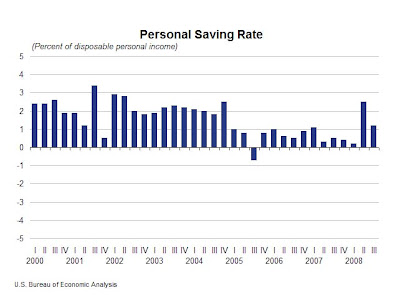 For years, Americans have been admonished that we are spendthrifts and are not saving enough, both as individuals or as a country.

The federal government has accumulated to the point where the National Debt Clock in Times Square had to be replaced in order to show enough digits to register totals over $10 trillion.

But $10 trillion is far from the whole story, because the government does not feel the need to follow generally accepted accounting practices (GAAP) and does not record the large and growing unfunded liabilities that have accrued for entitlement programs such as Social Security and Medicare. All-inclusive estimates of the national debt taking those liabilities into account run over $50 Trillion, which works out to about $170,000 in debt for every man, woman, and child in the country.

While running up these huge deficits, the government has ironically used deficit funding to create many tax incentives to encourage individual saving, including IRAs, 401(k)s, 403(b)'s, and a variety of other tax-favored retirement savings options, as well as 529s, Coverdell Savings Plans, and other tax-favored education savings programs.

The empirical evidence is rather mixed on whether all these savings tax incentives actually DO much to encourage additional savings (rather than just giving tax breaks to people who would save anyway.) See, for example, The Illusory Effects of Savings Incentives on Savings by Engen, Gale, and Scholz.

Even with these incentives, many Americans do not save as much as policymakers think they should for retirement. Despite tax breaks and often generous employer matching contributions, many workers do not bother to sign up for the retirement plans offered by their employers.

Some policymakers, including President Obama, have called for a "negative-option" retirement savings plan, which would create "default" assumption that all American workers would contribute some of their earnings to a retirement plan, unless they explicitly opted in.

But now, the government's primary concern in creating another round of tax cuts is to stimulate consumption rather than savings. The worry is that last year's Stimulus Payments were not an effective stimulus because people saved too much of them, but the graph above shows personal savings rates were still quite modest in the second and third quarters, when the payments arrived.

Then again, some people on public assistance programs were forced to spend their stimulus payments quickly, lest the money disqualify them for means-tested benefits such as Supplemental Security Income or Medicaid.

An ordinary everyday man-on-the-street could surely be forgiven for asking, "What the heck does the government want me to do? To be responsible and save for the future? To spend in order to stimulate the economy? To keep my asset totals down so I can qualify for the assistance I need?"

The government really comes across as schizoid--and it surely hasn't been setting such a great example of managing its own finances in a rational way.
Posted by Mary O'Keeffe at 1:46 PM