A tale of two childcare workers: on the books vs. off the books 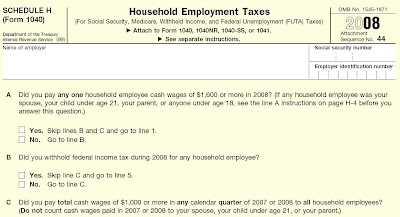 The New York Times reported that "nanny tax" issues were among the factors causing Caroline Kennedy to withdraw her name from consideration as Hillary Clinton's replacement last week. Although the NYT reports no specific details of Kennedy's situation, the story cites estimates that 80 to 95% of those who employ domestic workers such as nannies, housekeepers, and home health care aides do so "off the books."

New York's newly appointed Senator, Kirsten Gillibrand, is the mother of two young children. According to news reports, she and her husband use a daycare center. Most daycare centers pay their employees "on the books."

What the difference being "on-the-books" vs. "off-the-books" from the worker's point of view?

The answer may surprise many parents who have blithely assumed they are doing their nanny a "favor" by paying her off the books.

If a daycare worker caring for one of Senator Gillibrand's children is injured on the job, she will be eligible for worker's compensation to cover medical expenses and her lost time from work. An off-the-books nanny will not be.

If a declining economy forces the center to lay off a daycare worker, she will be eligible for unemployment insurance benefits to help bridge the gap until she finds a new job. An off-the-books nanny will not get such benefits.

When that daycare worker reaches retirement age, she will be eligible for Social Security and Medicare benefits if she worked "on the books" for at least ten years. An off-the-books nanny will not be eligible.

If the daycare worker is disabled before retirement age, she will be eligible for Social Security disability benefits. An off-the-books nanny will not be eligible.

If the daycare worker has children of her own and dies while her children are still young, her children will receive Social Security survivor's benefits until they are 19. The children of an off-the-books nanny will not get those benefits.

If the daycare worker has children of her own, she will be eligible for the Earned Income Tax Credit, which could give her an additional $5,000 in federal tax refund money (and possibly addition state EITC as well), depending on her income. An off-the-books nanny will get no refundable credits.

I know that our overall tax system is too complicated and filing all the paperwork for household employees is yet one more hassle for busy parents of young children.

But compliance is much easier now than it was when my children were young. I know this because I was actually one of those rare parents who insisted on paying her part-time babysitters "on-the-books" back in the mid-1980s, long before Zoe Baird and Kimba Wood hit the national radar screen. To minimize the burden on our babysitters, I actually paid both halves of Social Security, which is allowed, and I dutifully filed quarterly employee withholding paperwork with federal and state tax authorities four times per year.

Nowadays, the IRS has streamlined the process so that those who employ household workers only need to fill out a simplified form, Schedule H, once a year, which they attach to their own regular income tax Form 1040. There's still lots of room for improvement in the overall tax code, but the IRS now provides much more helpful guidance than it used to back in the old days. And, as the NYT article says, there are firms that specialize in doing the paperwork to ease the burden for a fee, and there is also "do-it-yourself" software available now, none of which existed back when my children were young.

Bottom line: Although paying babysitters on-the-books may create some headaches and expenses for the parents, complying with the law and paying your nanny on-the-books:

1) is the right thing to do legally (if parents pay the nanny at least $1,600 per year, or at least $1,000 in any one quarter, they are liable for federal employment taxes.)

2) will entitle the child's caretaker to many benefits, including Workers Comp, unemployment benefits, Social Security OASDI (old age, survivors, and disability benefits), and Medicare. Depending on whether she has children and her total income, an on-the-books nanny could also be entitled to thousands of dollars of Earned Income Tax Credit refunds.

3) will enable the parents to take advantage of child care tax benefits on their own tax return, either in the form of exclusions from taxable income (for employer flexible spending accounts set up for daycare) or child care tax credits*.

*Postscript: Interestingly, one of Senator Gillibrand's big issues during her time in Congress has been calling for a doubling of the child care tax credit. The Haig-Simon definition of income makes a strong case that the tax system should allow parents an offset against their own taxes when they pay for childcare that allows them to work. There's also a strong economic efficiency argument for the child care tax deductions or credits.
Posted by Mary O'Keeffe at 3:18 AM