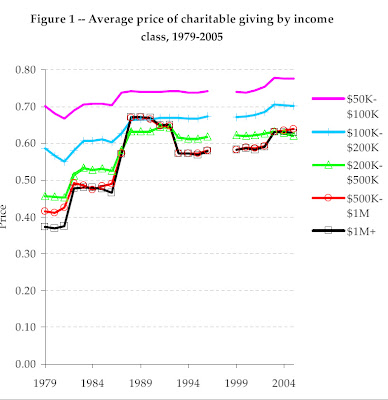 Most of our VITA site clients must give up a full dollar of spendable income in order to give a dollar to charity. That's because few of our clients itemize deductions, and even those few that do itemize may wind up with negative taxable income, which means that the marginal impact of another dollar's worth of deduction on their tax liability is zero. Moreover, none of our clients face estate tax and none have significant appreciated assets to give to charity in order to escape capital gains taxes.

However, a typical high income taxpayer faces a net price of giving a dollar to charity which is much less than a dollar, thanks to federal (and, in some cases, state) itemized deductions. In addition, taxpayers with large estates may be able to reduce their exposure to estate and inheritance taxes through charitable giving. The figure above, drawn from the Bakja Heim article discussed below, illustrates the after-federal-tax price of giving for taxpayers in various higher income categories. The figure does not graph the price of giving for taxpayers like those at our VITA site--they simply weren't included in the study, because their tax returns rarely shed much light on their charitable giving patterns. If the situation of our VITA site clients were drawn in on this graph for comparison, it would be a horizontal line pretty close to 1.00.

Last week, President Obama's economic team proposed to limit the benefits for charitable giving by taxpayers with incomes above $250,000. Immediately a chorus of protests arose from many nonprofit institutions that rely on donations from high-income taxpayers.

So the questions arises: what is the likely impact of such changes?

Center on Budget & Policy Priorities (CPBB):
Proposal to Cap Deductions for High-Income Households Would Reduce Charitable Contributions by Only About 1% provides a quick "back of the envelope" computation of the predicted effect. The CPBB calculations critical rely on an estimated "tax-price elasticity" of giving of around -1.0, which it draws from the Bakja Heim study cited below.

Before moving on, it's worth reflecting on what a tax-price elasticity of -1.0 actually means. It means that that a 10% increase in the tax-price of giving will cause donations to fall by roughly 10%. It means that charities may get 10% less in donations, but, as the CPBB points out, it also means that the government will collect significantly more in tax revenue. The government might, in theory, use that revenue to address some of the same problems that the charities were trying to address. Whether this is a good thing or not depends, in part, on whether you think the government is better or worse than the charitable nonprofit sector at creating social value.

It's interesting to contrast the methodology of the Bakja Heim study (an econometric study based on actual taxpayer data) to the Bank of America study (survey data analyzed by economists at the Center on Philanthropy at Indiana University.) The Indiana/Bank of America study is non-technical and written for a lay audience, and therefore easier to understand. However, the Bakja Heim study is worth a thoughtful read as it is an example of an exceptionally resourceful approach to a difficult empirical question. The graphs at the end of the Bakja Heim paper are particularly interesting and highlight some important differences in tax prices of giving and behavioral responses among different income groups.

However, the general consensus of policy analysts using both approaches is that the limitation on tax breaks for itemized deductions would have relatively little effect on the total amount of overall charitable giving.

The overall economy, particularly the major drop in asset values of securities, real estate and other assets, not to mention the assets of those who invested with Bernard Madoff, could have a much larger impact, since wealthy donors simply have less wealth and less income from which to give, charitable donation or no.

Other aspects of the tax code, particularly the estate tax and the alternative minimum tax, also need to be considered in analyzing the effects of the proposed limitations on itemized deductions.

There could also be important "timing effects" associated with a change in tax law that limits future donations. If the law is expected to limit the value of donations in a future year, then donors might have an incentive to accelerate donations they would have given in a future year.

Finally, it's important to note that even if the proposed limits on tax breaks for giving by wealthy taxpayers doesn't change the overall total of giving by very much, it could have significant effects on particular TYPES of tax-exempt organizations. In particular, the stylized facts suggest that there is a U-shaped pattern of charitable giving, in which both the poor and the very rich give a disproportionate amount of their incomes in donations, with lower income Americans give most of their donations to religious and other charitable organizations that help the needy, while higher income Americans give more to educational and cultural institutions.
Posted by Mary O'Keeffe at 5:52 AM