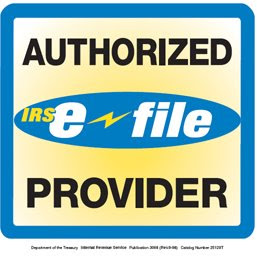 If you see the IRS e-file logo at your tax preparer, it means--IN THEORY--that the owners and chief officers of that tax prep business have passed muster with the IRS e-file provider application process, which includes a "suitability background check." That includes an FBI criminal records check, a credit report check, a check to make sure that the preparers' own personal tax record is clean, and a check for any previous violation of e-file non-compliance.

Once a preparer passes muster as an authorized e-file provider, he is entitled to display the logo above and to e-file returns. If the IRS later finds a pattern of unethical behavior, they can yank his e-file provider privileges.

So, IN THEORY, the sign above should provide some assurances that the IRS has found the tax prep business operators to be "suitable" and that they have not had their e-file privileges revoked for illegal tax preparation practices.

IN PRACTICE, the reality can be very different, as this December 2008 US Department of Justice (DOJ) Complaint shows. According to the DOJ, a husband/wife/mother-in-law team have operated a small family tax prep business out of their home since at least 2003. The business was originally founded by the father-in-law at least a dozen years ago. They operated under at least ten different D/B/A (doing business as) names, and several different EFINs (Electronic Filing Identification Numbers.)

Over the years, the IRS says it found suspicious patterns of fabricated deductions and credits on the thousands of returns e-filed by the small family-operated business. The IRS revoked the company's EFIN, but the business just applied for new ones--and apparently got them. In fact the IRS isn't sure it has actually found all the returns prepared by the business, because it's possible they also used other EFINs the IRS hasn't been able to track down yet. (This DOJ complaint provides a good illustration of why the IRS really can't be sure how many tax preparers are operating in any given year. A recently released government study suggested the best guess is somewhere between half a million and a million paid preparers in 2008.)

Eventually, the IRS essentially threw up its hands and decided that revoking EFINs was not enough to shut the business down. The Commissioner of the IRS asked the DOJ to file a complaint asking a federal judge to issue an injunction forcing the husband/wife/mother-in-law all to shut down their business entirely. The injunction was granted in February 2009, but meanwhile thousands of tax returns filed over the previous six years have created problems for the taxpayers who used the service, and who might have been reassured by the "IRS Authorized E-file Provider" logo the business was able to display.

I highly recommend reading the entire DOJ complaint, but here are some enlightening excerpts.

6. Chalamar is neither a licensed Certified Public Accountant nor a lawyer. She stated to the IRS that she has had no training in tax preparation and elaims to call ~ IRS 1-800 number whenever she has a tax question. Chalamar did not file her own individual tax returns for 2001, 2002,2003, and 2004 until August 2005.

7. Chalamar has been a principal and/or owner of the Muhammads' tax preparation business since at least 2003. Beginning in 2003, she exercised control over the business' finances, paid herself a salary from the business' funds, and filed an application for an Electronic Filing Identification Number (EFIN) - which is nceded to elcctronically filc income tax returns through the IRS's E-File program - with the Internal Revenue Service in which she identified herself as the Responsible Offcial and Vice President of the company. She obtained an EFIN in January 2004, which the Muhammads' business used to electronically file fraudulent tax returns
with the IRS for the 2003 and 2004 tax years.

As the complaint above noted, Chalamar did not file her own personal tax returns from 2002 through 2004, even though she clearly had lots of revenue from all the people who paid her to do their tax returns.

She did, however, prepare a timely 2002 tax return for her husband Curtis. The return she prepared for Curtis gave his filing status as "Head of Household." In a subsequent tax audit of that return, however, the two of them didn't agree on whether they had actually been married that year or not. Curtis said they were already married in 2002. Chalamar testified that they were not yet married in 2002, but she also testified in Tax Court in 2006 that she could not actually "remember the date" of their marriage.

According to the IRS, the tax returns prepared by the business for their clients weren't any more accurate than the return Chalamar prepared for her husband. The following paragraph from the DOJ complaint suggests some practices that may have contributed to their inaccuracy:

How many tax returns did they prepare? The IRS isn't sure, but it's at least thousands.

17. The Muhammads' business has prepared and electronically-filed at least 2,633 federal income tax returns since and including the 2003 tax year.

19. The total size of Muhammads' customer base is not known due to the fact that Chalamar has failed to provide the IRS with a complete customer list. On multiple occasions in 2006 and 2007, the IRS issued requests to Chalamar Muhammad seeking, among other items, a list of customers that have used the Muhammads' tax preparation business. In November 2008, the IRS issued a letter requesting the information pursuant to I.R.C. § 6 i 07(b). Chalamar responded with an incomplete list of only 50 returns prepared and filed for the 2006 and 2007 tax years.

20. Chalamar Muhammad prepared the majority of the returns that have been electronically filed with the lRS. Yet less than 1% of the 2,633 electronically-filed returns identify a paid tax return preparer as required by law.

By the time of the DOJ complaint, the IRS had already completed audits of hundreds of their customers. Depending on the year in question, error rates ran as high as 90% or more and the IRS has already found additional tax owing of over $2 million, an average of over $2,000 per return. The DOJ estimates that the business prepared fraudulent returns costing the US Treaury over $7 million in revenue. And there may be many more returns that the IRS will never be able to track down, because the business did not always bother to identify themselves on the returns they prepared for their customers.

The DOJ complaint suggests that some of claimed deductions were flagrant fabrications. For example, some returns prepared by the Muhammads listed fictitious donations to churches that did not even exist.

The good news: in March of this year, the Federal Court granted them the injunction the DOJ and IRS sought against at least two members of the family: Chalamar and Curtis Muhammad have now been permanently enjoined from participating in the tax business. They did not appear in court to defend themselves against the injunction request, so the judgment against them was entered by default.

However, Chalamar's mother, Doranna, was apparently not easy to track down in order to serve papers against her. At the time the injunction was granted against Chalamar and Curtis, the government reported that the case against her "remained pending."

So, as far as I can tell, the court has not yet granted an injunction that would forbid Doranna from preparing taxes. I would HOPE that her EFIN has been revoked, but apparently she would not be doing anything illegal by preparing paper tax return or giving tax advice to paying clients, or from e-filing under the EFIN of yet another family member or friend the IRS hasn't yet identified.

So at least until the process server finds her, Doranna is apparently at liberty to continue to hang out her shingle as a tax preparer.

Caveat taxpayer!
Posted by Mary O'Keeffe at 6:19 AM