One reason interest rates are so low now 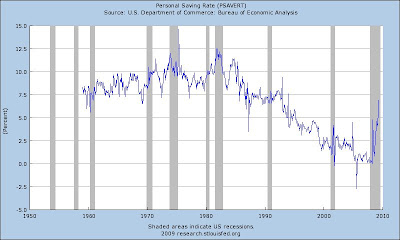 The personal savings rate graph above comes from the St. Louis Fed via: Mark Thoma

The graph above shows that personal saving is now running almost 7.5% of income. Less than five years ago, the personal savings rate was actually negative. That's an impressive amount of change in a short period.

Due to economic uncertainty, people have been saving a LOT lately--and they've looked for traditionally safe ultra-conservative places to park their money, like US Treasury Securities.

That's driven down interest rates to levels I never thought I'd see in my lifetime. Within the last year, rates have gone down to as low as 1 basis point on short-term Treasury debt (that's not 1%, it's 1/100 of 1%.) For weird technical reasons, they were even (very temporarily) negative.

They've gone up a bit from those record lows, but three-month T-bill rates are still running under 20 basis points. Long-term Treasury debt pays more, of course--30-year bonds currently yield around 4.5%.

Still, those are phenomenally low interest rates. They can't last forever. Individuals probably won't sustain these savings levels indefinitely. And the US government has been borrowing more than Americans have been saving. The world isn't going to extend our line of credit at growing levels forever.

If the US keeps running deficits, the interest rates on Treasury debt will rise, which will in turn cause government debt service costs to rise, UNLESS the government figures out a way to get its fiscal house in order.
Posted by Mary O'Keeffe at 1:18 PM