Thanks to Tax Lawyer Peter Pappas for the link to the video above illustrating the many problems that can ensue for unwary taxpayers who do not realize that the official position of the US government is "Buyer Beware. ANYONE can go into the tax prep business." As far as the federal government is concerned, convicted criminals, the illiterate, the innumerate, and those with no tax law instruction whatsoever are very welcome to hang out their shingles as "professional tax preparers."

Interestingly, however, it appears that company shown in the video above, KBO Tax Services in Bladensburg, Maryland, is an authorized e-file provider, which SHOULD mean that SOMEBODY affiliated with the business passed at least a little bit of scrutiny with the IRS. Unless the applicant is an attorney, CPA, EA, bank official, or officer of a publicly held corporation, a would-be E-file provider must provide his fingerprints, SSN, and other identifying information so that the IRS can run a "suitability check." That suitability check includes checking the applicant's criminal record with the FBI, a credit check from a credit reporting agency, and an IRS tax compliance check to see if the applicant's own personal income tax record is clean.

A visit to the KBO tax company website indicates a very strong web presence, which claims e-file capability. Mr. and Ms. Oladipupo are listed as the company's principals at the national headquarters in Bladensburg, so presumably one or both of them submitted an e-file provider application to the IRS. Not only do they still appear to be in business, they are soliciting other would-be tax providers to buy a KBO tax franchise from them, so they can benefit from the "good name" of KBO Tax in other locations across the country. 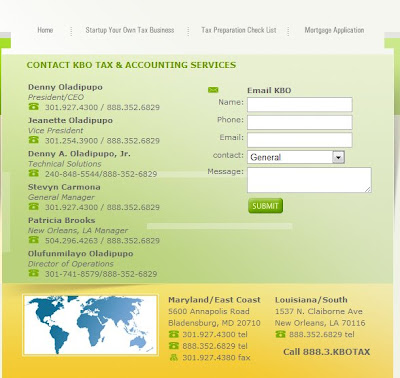 If the accusations made by the taxpayer in the video are correct, hopefully the IRS will eventually take action to remove KBO's certification as an "IRS-authorized efile provider."

That is small comfort to the taxpayer, of course. Even if KBO prepared and efiled a bogus tax return for her, SHE is the one liable for the taxes and interest and probably penalties as well.

So what's a hapless taxpayer who wants help supposed to do? The video above provides a lot of cautionary tales about what the taxpayer apparently did not do.

A big red-flag is that she did NOT even bother to READ over her tax return before signing to authorize e-filing. In fact, she didn't bother reading over the return after she came home either. She set it aside and didn't look at the contents of what she'd signed until the IRS sent her an audit notice two years later.

Last summer, Cary said she got a notice from the IRS saying she was being audited. She said she was stunned, but even more shocked when she looked at the tax return the IRS was questioning.

"I ran home and looked at my tax papers -- the papers I've never looked at after I collected my check. I pulled them out and I found something that really alarmed me," Cary said.

Her schedule A for 2005 included thousands of dollars in deductions that she said she knew nothing about. The deductions included more than $2,100 in expenses for meetings and seminars, nearly $3,000 for computer and Internet expenses and more than $1,500 for uniforms and shoes, Miller reported.

In the charitable contribution column, Cary's return showed a deduction of $3,256. She said she did make a donation that year to the Salvation Army, but she said she didn't think it wasn't worth that much.

Cary's return claimed itemized deductions of more than $30,000 -- almost half her adjusted gross income for the year.

That's a HUGE mistake! At our VITA site, we walk our taxpayer line-by-line through every single line of their return, explaining the significance and origin of each and every item reported on the return. We remind our taxpayers that ultimately THEY are the ones responsible for the accuracy of their returns, and so they need to work with us as part of the quality review process. Our Quality Review process says that we do not ask a taxpayer to sign until after we have walked her through her return and answered all of her questions to her complete satisfaction.

Does your preparer take the time to walk you line-by-line through your return, explaining what each of the numbers represents and how it relates to the documents and information you provided to them?

Kick the tires and check under the hood of your tax preparer.

If the preparer says he is a CPA or attorney, you can check with your state's licensing authority to make sure that their license is valid and whether they have been subject to any disciplinary sanctions. If the tax preparer is an Enrolled Agent, the IRS says it will confirm that status if you email them with a query at epp@irs.gov, or call the IRS Detroit office at (313)234-1280. You can also email the IRS Office of Professional Responsibility at opr@irs.gov with your query, which should include the full name and address of the preparer. The IRS also issues official cards certifying the Enrolled Agent status, and you can ask to see that card. (It seems to me that the IRS should also issue certificates suitable for framing, because that might do at least a little bit to raise public awareness of the Enrolled Agent credential.)

Although the Tax Lawyer believes everyone should use a CPA, attorney, or enrolled agent, that's hardly practical. There simply aren't enough of them in the country to do the tax returns of everyone who wants paid assistance right now. And, as Robert Flach has pointed out, there simply isn't the capacity for all the currently unenrolled tax preparers to take the Enrolled Agent exam before next year's filing season.

The classic advice to "Ask a friend," isn't necessarily such a hot idea either. The hapless taxpayer shown in the video above said she had previously been a happy customer who had raved about her preparer and referred many of her friends to them--until she was audited a few years later and actually took a careful look at the return they'd prepared for her.

So here are a few more ideas for wary taxpayers:

1) Check out the Better Business Bureau. You may be able to find out something about how long the preparer has been in business, whether there are any complaints about them, and how they have responded. I checked out KBO Tax in Bladensburg on the BBB and discovered the BBB had given them a grade of F. The BBB reported 5 complaints against the business since they started monitoring it in 2007, of which one had been resolved. The BBB reported that the company had failed to respond to the other four. This information would not have helped the taxpayer shown in the video, because she had first patronized the company in 2005, apparently before complaints started showing up at the BBB. Still, it's free and easy, and it's worth a shot to check the Better Business Bureau website.

Of course, you can also check out the BBB on attorneys, CPAs, and Enrolled Agents. It's easy to do and it's free. I discovered that Tax Lawyer Peter Pappas has an A rating with the Florida Better Business Bureau, credited by the BBB with making "all reasonable efforts to respond" to two complaints. (The fact of a few complaints is not, in and of itself, grounds for concern, because there are lots of unreasonable customers out in the world, especially at law firms, which disproportionately attract a self-selected pool of clients prone to complain.) I was also able to learn that his business opened in 1988 and the BBB has been tracking it for at least six years.

2) If you qualify for services, you can find free tax assistance from IRS-trained volunteers who have passed IRS certification tests at VITA sites and AARP sites. VITA sites are designed to serve low and moderate-income taxpayers with simple tax returns and incomes up to $49,000 next year. AARP sites are designed to serve elderly taxpayers with simple tax returns. Some VITA sites specialize in particular types of returns for taxpayers with certain special circumstances, such active service military personnel or foreign students studying in the US on foreign student visas.

3) Get a second opinion on your taxes and/or quality review it yourself. Before you see your tax preparer, do a first cut attempt at preparing your own tax return, so you'll have a "reality check" to compare against your preparer's work. There's inexpensive or free software out there to make that task reasonably easy. That way you'll have a point of departure for asking your preparer questions as he leads you line by line through the return he has prepared for you to sign. If there are discrepancies that he can't resolve to your satisfaction, don't go ahead and sign without understanding WHAT you are signing. Take it home and carefully go over until you DO understand it.

4) If you are uncomfortable with a tax return that has been prepared for you, you can certainly take it to another preparer for their review before you sign it. Again, if you qualify for VITA or AARP services, you are welcome to bring your paid preparer's return for us to check over. If the return falls within the scope of our certification, we can help you formulate questions to ask your original preparer to amend your return.

5) Everybody makes mistakes. Career IRS employees sometimes make mistakes in answering taxpayer questions. The Secretary of the Treasury made mistakes on his own tax return. If you browse the Tax Court opinions, you can see that attorneys and CPAs sometimes make mistakes on their own returns. Ask your tax preparer about his Quality Review process. Does he have a second person independently check over the return? If not, you should make DOUBLY sure that you do.

6) Kick the tires some more. Ask your tax preparer exactly who will be preparing your return and who will have access to your sensitive data. Will your CPA be outsourcing and faxing your documents and tax information over to India, a growing practice at large CPA firms? If so, what protections will be on your private information? What are the credentials and training of the people actually preparing those returns?

7) Ultimately, remember that no matter who prepares your return, YOU the taxpayer are ultimately the person responsible for its correctness. It's your responsibility to ask questions of your tax preparer BEFORE you sign to make sure that you understand what you are signing--under penalty of perjury!
Posted by Mary O'Keeffe at 9:52 AM