I'm putting the finishing touches on my fall term public finance class. In almost three decades of teaching public finance, I've never had to rethink/rework/recast my class as much I've had to do this year.
It will be several years before the public finance textbooks can digest and catch up with what's happened in the past year, let alone all the changes likely to come in the next few years. This is true for all levels of government in our country--federal, state, and local--and the financial crisis has reverberated among most countries around the world as well.
The textbook we use in the class is Gruber Public Finance and Public Policy, 2nd ed (2007).
Let's take a look at his graph showing past patterns of deficits and surpluses as percentage of GDP from 1930 to 2005: 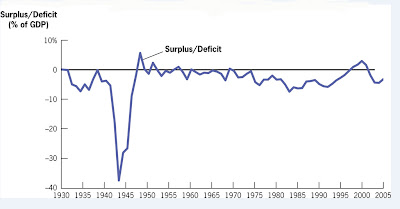 As you can see, except for the phenomenal effort our country made to finance World War II (at a time when it was extremely patriotic to purchase War Bonds to finance the war effort), our annual deficit averaged around 2% of GDP, and only hit its nadirs of 7% to 8% of GDP a few times.
The non-partisan Congressional Budget Office (CBO) graph shows how drastically things have changed in the last year: we are now in largely uncharted territory, with an unprecedented peacetime deficit of almost 12% of GDP.

We financed World War II with War Bonds, and we never really paid off much of that debt. We rolled most of it over. But, we mostly "owed it to ourselves," as the saying goes. Most of the folks who bought those War Bonds to finance World War II were Americans, and they were reasonably happy to continue to hold those bonds.
It's different these days--as foreign governments now hold an increasing share of US government debt, and it's not clear how much longer they'll be happy to continue to hold it. If and when they decide to sell their holdings, interest rates are likely to soar, with a much increased burden to the US Treasury of servicing that debt.
Moreover, as Paul Krugman points out, we didn't really need to pay off our legacy debt from World War II, because our economy was growing at such a fast clip in the post-war decades. Even if the dollar amount of the debt didn't go down, the size of the burden it imposed shrank in comparison to the national resources available to support the debt service on that legacy debt.
Paul Krugman thinks our economy can grow to make our current debt service manageable as well. Office of Management and Budget (OMB) estimates of the deficit for the next 10 years rather optimistically project that deficits will shrink back to about 3% of GDP within the next few years and remain at that level for the remainder of the decade.
It's not going to be easy or automatic, however. The demographic writing on the wall--due to an aging population and rising health care costs--means that Americans need to get their fiscal houses in order at all levels--as citizens of federal, state, and local government entities as well as individually--in order to prosper. Indeed, the graphs above are misleading--the truth is even worse than they show, because of the many "off-budget" items not included in our official government accounts.
We need a smarter public policy than we've been pursuing so far. Collectively, Americans have been pursuing unsustainable policies. State and local governments, which have more limited borrowing abilities than the federal government, have already been forced to face some of that reality. So have the many individual Americans who overextended themselves with subprime mortgages and excessive credit card debt. Small businesses have always struggled, but an increasing number of large businesses are struggling as well. The day of reckoning will also come for the federal government--it can't continue to bail out everyone forever.
At all levels of government, we need to take our heads out of the sand, and take a careful look at our taxing and spending policies. What are we taxing, who is it burdening, and how is it affecting incentives? Where is the money going and what value is it creating for the public? What is the economic justification for all the things the government does? Are there opportunities for the government to operate more effectively?
Posted by Mary O'Keeffe at 5:08 AM