Treasury Secretary Geithner wrote to Congress to implore them to increase the ceiling on the national debt, currently at 12.1 Trillion dollars.

"It is critically important that Congress act before the limit is reached so that citizens and investors here and around the world can remain confident that the United States will always meet its obligations."

Congress has never turned down such a request before.

Then again, these are unprecedented times: the deficit and debt have reached record highs. The graph below, released by the Treasury Department last December, shows the past and projected future government debt as a percentage of GDP. The number for 2009 is already considerably worse than the projection shown on that graph from December. Current economic conditions necessitate deficit spending, but the long-term trend is clearly not sustainable indefinitely. A major factor driving the future debt projections are unfunded Medicare entitlement spending--and none of these projections include any provision for new health care initiatives currently under consideration. 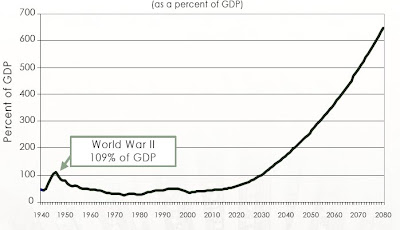