The Leviner-Richison study contributes some fascinating new evidence on tax compliance by taxpayers who use different types of preparers. Some of their results present quite a contrast to the previous literature in the subject, which I discussed in my last post.

The big chains (#5) and Other professional preparer (#6) accounted for 56% of the returns in the sample. Very few returns in the study sample were prepared by CPAs and attorneys that the authors decided to combine those categories for their analysis. That's not too surprising, since EITC recipients are low-income taxpayers and very few attorneys and CPAs specialize in serving that clientele, aside from those who volunteer in VITA.

Here's how they summarize their results:

As illustrated in Table 1 below, our analysis reveals that CPA/Attorney, HR Block/Jackson Hewitt, and IRS/VITA/TCE staff have the lowest percentage of returns with change (either positive or negative) to EITC when the original amount claimed on the returns is compared to that concluded by the IRS after audits and reviews.... 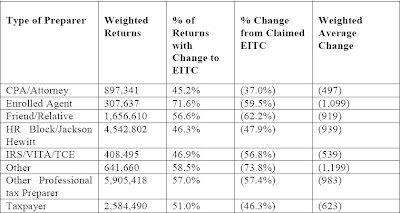 An important note to keep in mind: the rules for claiming "qualifying children" on a tax return were quite different in 1999 than they are today. The rules are still complicated, confusing, and subject to abuse today, but this was arguably even more true of the rules that applied in 1999.

That said, this is a REALLY discouraging error rate. Bear in mind that these returns were a RANDOM representative set of returns filed in 1999.

The authors have additional cautionary notes to bear in mind in interpreting this data:

An examination of the Adjusted Gross Income line (AGI, Table 2) reveals a nearly 50 percent rate of returns with change for CPAs/Attorneys, and over 60 percent for Enrolled Agents. It is possible that the financial circumstances EITC claimants have are complex enough to confuse even the most trained of preparers. Paid preparers usage is believed to be more common among taxpayers with complicated returns which may go some way toward explaining errors on returns filed by preparers (as opposed to taxpayers filing for themselves) generally. This might be particularly the case with regards to taxpayers engaging the most trained and experienced preparers such as those who are CPAs and Attorneys. Even so, errors made on paid prepared returns do not necessarily mean that these errors are the result of the preparer’s, as opposed to taxpayer’s, misconduct.

In other words, it's important to bear in mind the correlation vs. causality problem here. It's entirely possible that the higher error rate of Enrolled Agents vs. unenrolled preparers may reflect the greater complexity of the returns they prepare rather than a lesser degree of competence or conscientious adherence to the law.

They also looked at patterns of error in AGI reported by different types of preparers, summarized here:

The types of preparers to exhibit the highest rate of change in claimed AGI are: Other Professional Tax Preparer, Other Preparer, and CPA/Attorney, (in that order). HR Block/Jackson Hewitt and IRS/VITA/TCE have almost half that rate of change and are the most accurate compared with other preparer types. 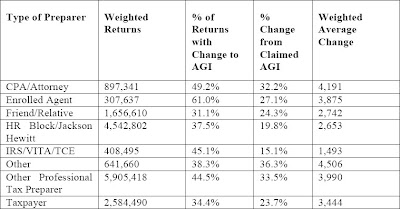 Again, we need to keep in mind the previous cautionary note about correlation vs. causality, because the types of taxpayers who patronize different types of preparers are not necessarily the same.

This study was intended as exploratory rather than conclusive, but it certainly provides some interesting data for consideration.
Posted by Mary O'Keeffe at 1:15 PM