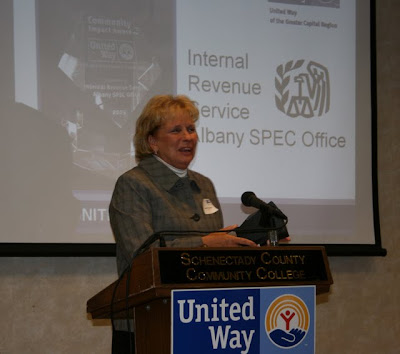 Our Union College VITA site is extraordinarily fortunate to have an outstanding IRS employee, Joanne Passineau, a senior tax consultant from the Albany IRS office, as our VITA site relationship manager.

Joanne is shown above receiving the much deserved Community Impact Award from the United Way of the Greater Capital District at their annual award ceremony on behalf of her entire team of outstanding IRS employees in the Albany Stakeholder, Partnerships, Education, and Communication Office (SPEC).

Joanne and her Albany team truly embody the very best of the word "Service" in the name of the Internal Revenue Service. Time and again, our IRS tax consultants have gone above and beyond the call of duty to help the volunteers at area VITA sites carry out our mission of helping low and moderate income taxpayers comply with an exceptionally complex tax law.

IRS employees don't write the tax law. Congress does that.

Most people think of the IRS in its punitive enforcement role, and that's certainly an important role for the IRS. Human nature being what it is, there will always be a need for auditors and the criminal investigation departments of the IRS.

But it's also important to remember that the majority of Americans are law-abiding and want to comply with their tax obligations, and a critical service role for the IRS is to help those taxpayers who want to abide by the law do so in the least burdensome way possible.

VITA sites are designed to help those taxpayers who don't want to cut any corners, who want help in filing completely accurate tax returns that will secure all tax benefits to which they are legally entitled, while keeping them totally on the right side of the law.

Joanne's team at the IRS SPEC office has done an outstanding job of supporting our VITA site and many other VITA sites around the Capital District. Our college VITA site has had many superb IRS employees as our relationship managers over the years. Mary Ellen Sousie was our first IRS relationship manager, who helped my predecessor, Therese McCarty, and her students to launch the Union College VITA site back in January 2005.

I can honestly say that I would not have agreed to take over Union's VITA program in its second season if Therese had not raved so enthusiastically about Mary Ellen's terrific support. Mary Ellen was a tough act to follow, and when she was transferred to another position, I was in considerable despair. I thought to myself, "Surely, Mary Ellen was one of a kind. There couldn't possibly be another IRS employee as willing to go the extra mile as Mary Ellen was." But I have since learned that I was wrong, as we've had a long stream of outstanding IRS liaisons. Patti Faulkner, Kathy McNulty, and Joanne Passineau have all been standout rock-stars as our IRS relationship managers. Other IRS SPEC employees in the Albany office have pitched in enthusiastically and energetically whenever our officially designated liaison was out of the office on temporary duty elsewhere, for example, traveling to a military base to train VITA preparers there. 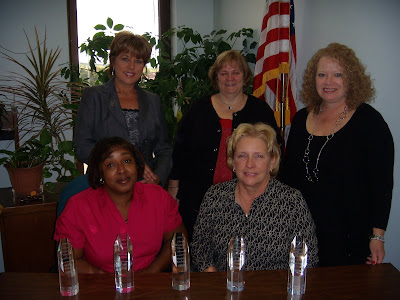 You can tell they love their jobs. Many of them are former auditors. By contrast, their current jobs are proactive and supportive. When they answer my phone calls, I can always hear the enthusiasm in their voices as they greet me, ready to tackle my latest question about the tricky bed buffalo I've encountered in a VITA taxpayer's situation.

My students and I can see clearly that the IRS mission is not just about helping to catch the bad guys after the fact. It's also about serving the vast majority of Americans who want to be the good guys to file accurate tax returns!
Posted by Mary O'Keeffe at 5:02 PM