You might recall that Treasury Secretary Geithner reported some problems during his Senate confirmation hearings in January. His tax returns had a few tricky bed buffaloes that tripped him up--and TurboTax didn't help flag those bed buffaloes for him.

Once again, the New York Daily News has the best headline and snarkiest article: TurboTaxed:

Let’s hope the economy is easier to figure out than TurboTax. That’s the software that Treasury Secretary nominee Timothy Geithner used when he failed to pay about $34,000 in taxes, he admitted this morning in a confirmation hearing that was delayed because of his tax flubs. “I used TurboTax to prepare my returns,” Geithner told the Senate Finance Committee, looking just a little embarrassed, and prompting laughs in the hearing room. He wouldn’t blame the software for his errors, but he didn’t say it helped him spot them, either.

Well, the new 2009 TurboTax would have helped him catch at least one of his errors. 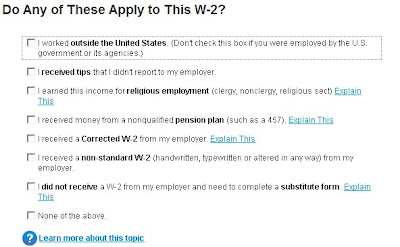 Nothing there would have helped red-flag the issue for Secretary Geithner.

But now, look at the 2009 Turbotax version of the same helpscreen. The helpscreen has an additional feature this year, just for folks in jobs like the one Secretary Geithner used to hold at the International Monetary Fund (IMF).

Check out the fourth item on the list below--it is a brand new TurboTax feature in the 2009 version. (You can click on the image to see a higher resolution version.) 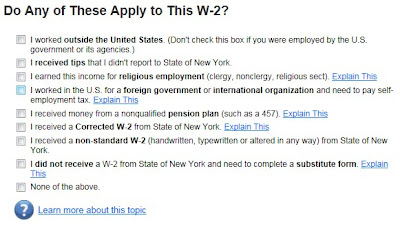 Clicking on the "Explain this" after this new fourth item yields the following helpful new TurboTax screen explaining the bed buffalo that gave Secretary Geithner so much trouble: 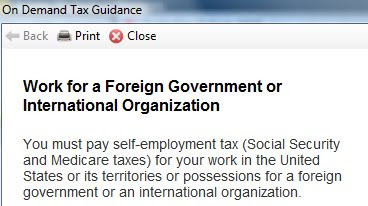