Thanks to Taxprof for posting this remarkable video of President Kennedy visiting the IRS in 1961, a fascinating glimpse into a very different era, the era of my childhood. It stirred up many memories and reflections for me.

In his speech, President Kennedy mentions that the previous year's national income had totaled 500 billion dollars, of which the federal government had collected 90 billion in taxes, or 18%.

As you can see from the graph at the top of my blog, the percentage of national income collected in federal taxes has stayed remarkably close to that 18% mark throughout the past half century, with only relatively minor oscillations.

And yet, the statutory marginal tax rate schedule has changed a lot through the years. The federal income tax rate schedule ranged from 20% through 91% during 1954 to 1963, the years of my early childhood, including the year of the President's speech. The statutory rates in effect in 2010 now range from 10% to 35%.

How can the marginal rates be so different from the effective rates? The difference, then as now, are the bed buffaloes in the tax code. When the top rates were at 91%, the highest paid taxpayers had enormous incentives to scout out creative ways to divert their income from a taxable form to a non-taxable form. With top rates at 35%, those incentives certainly still exist, but they are much less now than they were then.

I was reminded of that when I went down last week to visit my mother, who took me on a tour of her old tax returns. She had saved all of them, back to the first ones she filed for part-time jobs she held as a teenager in the late 1940s, and continuing through the decades since then. Her very first tax returns were filed right after the war when the "Pay your taxes to defeat the Axis" patriotic campaign still resonated in everyone's ears.

My parents' income was modest throughout their years, and it was eye-opening to see how much they had paid in income taxes during those financially challenging early years of their marriage.

My parents were married in 1951, when my dad was a private in the Army. My dad turned 21 the day he married my mother, who was 19 at the time. They had been born and raised in the District of Columbia, so they had no right to vote back then, even though he would soon be going off to serve in Korea. (DC residents finally got the right to vote in presidential elections in 1960. My parents voted for Vice-President Nixon, but most of our neighbors, friends, and extended family voted for President Kennedy.)

The photo below shows my dad in Korea in late 1952. 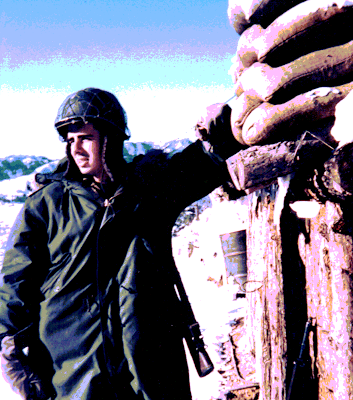 My dad had voluntarily enlisted in the Army, but many were drafted in those days. The draft is effectively a type of tax, a tax that must be paid "in-kind," that is, via services rendered at rates lower than the draftee would voluntarily accept, as opposed to taxes paid explicitly in cash remitted to the Treasury. Wages paid to soldiers in those days were very, very low. The Army didn't have to pay much because the draft ensured a steady stream of manpower. The implicit in-kind taxation of the draft was not included in the tax revenue figures President Kennedy cited in his speech to the IRS, nor is it captured in the graph at the top of the blog. (The draft was still in effect until the early 1970s.)

So, during the early years of their marriage, most of their income came from my mother's earnings in the kinds of clerical jobs a young woman with a few semesters of college could obtain. Still, my dad's time in the Army wound up working well for my family. My dad came home safely from Korea and I was born the year after he returned. He had spent three semesters in college before enlisting in the Army, and he was able to finish his college education afterwards on the GI Bill, getting a Master's in Library Science from the Catholic University of America in 1958. I had two more siblings by the time he finished his education.

Those were different times. A "Tea Party" movement would have been unthinkable in my early childhood. The anti-war protests of the later 1960s were yet to come.

The mood of the day was captured in President Kennedy's inauguration speech "Ask not what your country can do for you. Ask what you can do for your country." My grandparents, who had been strong Kennedy supporters, took me to that historic inauguration, and it is a cherished early memory for me--I was 7 years old at the time.

But I did not know of President Kennedy's speech to the IRS later that same year--until I encountered it in the TaxProf blog today.

There is much to ponder in the video linked above. I'll be posting more thoughts in the coming days. My thoughts are complicated, mixed, nuanced, and not easy to capture in a single blog post.
Posted by Mary O'Keeffe at 4:50 AM