Our VITA students have many talents! Encore! 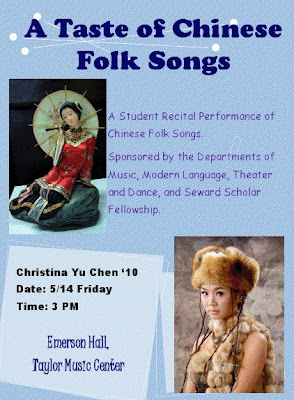 Christina Yu Chen, a VITA student preparer in 2009, is giving her senior recital this Friday. She is double majoring in managerial economics and theater, which means writing two separate senior theses. She interned for Citigroup last summer and will be working at Goldman Sachs after her graduation. She and her husband, an attorney in China, are expecting their first child in a few months.

Mazel tov to Christina, Cristina, and Allison!
Posted by Mary O'Keeffe at 8:11 AM