Do US Presidents efile their tax returns?

Recent discussions of efile mandates for preparers got me wondering whether US Presidents and Vice Presidents have chosen to efile their tax returns in recent years.

For the past few decades, Presidents and Vice Presidents have routinely made their tax returns public while in office. The Tax History Project has archived their returns, which you can see here.
All the presidential tax returns currently available in that archive appear to be conventional paperfiles, not efiles.

Inquiring minds wonder why not?

After all, the federal government has been heavily promoting efile for almost two decades. The tax professionals who have prepared returns for recent presidents appear to be registered efile providers who clearly have the software available to efile, based on their websites. Indeed, recent presidential returns appear to have been prepared using tax software, but they were apparently signed and mailed rather than filed electronically.

If the administration truly wants to encourage efiling, shouldn't Presidents lead by example?

The lone efiling exception is not a President nor a Vice President, at least not yet.

Ironically, given her affiliation with the Tea Party protest movement, the only efiler evident in the archives is Sarah Palin. 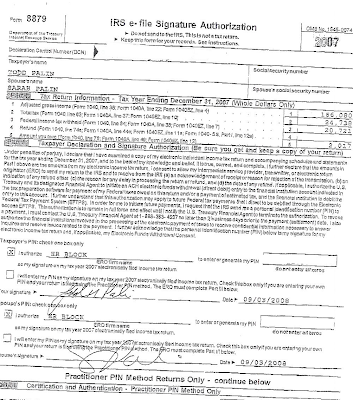 Of course, efiling is no guarantee of an error-free return, as several tax law professors have concluded that there are serious errors on the Palin returns.

To be fair to efiling, however, it should be noted that it's unlikely that a paper-based tax professional preparer would have caught the errors either, since the allegedly missing income had not been reported to the taxpayer on a W-2 or 1099. But the problem remains that tax software can give unwitting taxpayers a false of security about the accuracy of their tax returns.

And the puzzle remains as well: why don't our presidents and vice presidents "get with the program," follow Sarah Palin's lead, and efile their tax returns?
Posted by Mary O'Keeffe at 1:57 PM