New York budget problems: how does YOUR state compare? 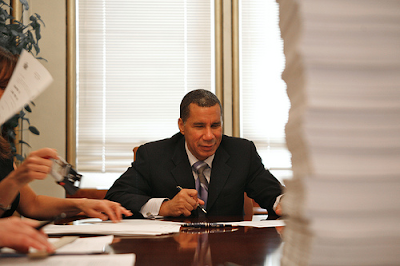 The New York State legislature has yet to perform on its constitutional obligation to deliver a balanced operating budget by April 1. They are closing in on setting a new record for the latest budget ever. (The current record of August 11 was set in 2004, but times are tougher now and the legislature is even more dysfunctional now than it was then.)

Cash is running perilously low. The state is scraping along by borrowing money from its counties, but the Wall Street Journal reports that the counties are threatening to revolt and withhold funds from the state.

One piece of the New York budget gap was originally supposed to be plugged by requiring hedge fund managers to pay the same state income taxes on their compensation as the rest of the working folks in the state do on their wages. (Currently, hedge fund managers get most of their compensation in the form of so-called "carried interest," which gets highly preferential tax treatment at both state and federal levels.)

Although Governor Paterson originally planned to plug this loophole, he has now dropped that idea after neighboring state Governor Rell started wooing the hedge fund managers to move their operations into their state.

How can she afford to offer such tax generosity in such tough times? According to CNN, Connecticut has the highest state debt per capita in the country. 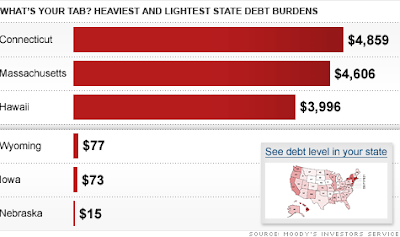 But New York's per capita debt is nothing to write home about either. According to CNN-Money, New Yorkers are on the hook to the tune of $3,135 per person. Nebraska is apparently the thriftiest state in the country, a mere $15 per person!

How does your state compare? Click on this link to check out the debt levels in your state.

And those figures are just the tip of the iceberg, because they do not include the off-budget unfunded pension liabilities in many states. At least New York is in relatively good shape on that score. (Connecticut, however, is not. A recent study by the Pew Commission found Connecticut's pension fund to be in the third worst position among all 50 states. If you are willing to shove your unfunded liabilities under the rug, it's easier to offer tax deals to attract people--in the short run!) To see how your state compares in unfunded pension liabilities, check out this report by the Pew Commission.
Posted by Mary O'Keeffe at 2:18 PM