Still "room for improvement" but ... 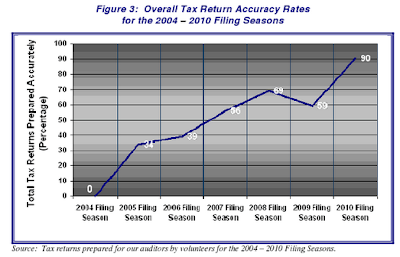 Who is TIGTA, you ask?

The Treasury Inspector General for Tax Administration (TIGTA for short) is basically the auditor of the auditor!

That is, TIGTA has the mission of keeping tabs on whether the IRS is doing a good job in providing services to taxpayers and administering our country's tax laws.

One of the programs the IRS runs is supporting Volunteer Income Tax Assistance (VITA) programs like the one I oversee at Union College. The IRS has offices all over the country that provide training, software, and support to VITA sites likes ours, and so part of TIGTA's job is to send out TIGTA "secret shoppers" to make sure that VITA sites do a good job.

These secret shoppers show up at VITA sites with fake scenarios and apparently valid documents, and they ask VITA volunteers to prepare tax returns for them. Ideally, the TIGTA folks carefully construct these scenarios so they accurately represent the typical kinds of tax issues that come up at a VITA site. If so, the error rates they measure in their samples should accurately measure the overall accuracy rate of VITA sites.

The overall trend in the graph shown above is heartening, but there's still room for improvement.

A few technical notes: the apparent "improvement" from 2009 to 2010 may be due, at least in part, to the fact that the scenarios used in 2009 oversampled a very unrepresentative type of taxpayer (a homeowner who paid property taxes and who qualified for what I call the "non-standard standard deduction." Such taxpayers constitute about 1% of typical VITA taxpayers, but they constituted 25% of the TIGTA secret shopper visits. As a result, TIGTA secret shoppers found a large number of $50 errors with VITA preparers missing that relatively obscure tax break for secret shoppers far more often than would actually happen with real taxpayers, because it's very rare for VITA taxpayers to qualify for that particular tax break.) Fortunately, the scenarios used in 2010 were more representative, so the 90% probably represents a more accurate measure of VITA accuracy.

Still, there is room for improvement--for TIGTA as well as VITA.

It's interesting to note that TIGTA itself made an error in explaining the tax reasoning behind the correct answer for one of its 2010 secret shopper scenarios.

I'll explain that TIGTA error in a separate post.
Posted by Mary O'Keeffe at 5:01 PM