"I made baseball as much fun as doing your taxes!" 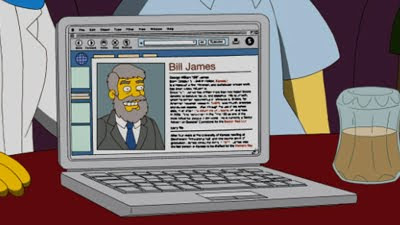 NESN: Sabermetrician Bill James Pokes Fun at Himself on 'The Simpsons'

Who knew The Simpsons could be so in tune with sabermetrics?

The long-running cartoon featured a guest appearance from Bill James on Sunday night, and the most famous sabermetrician of them all made fun of himself.

As four nerds sat around a table at Moe's, the nerdiest of them all, Professor Frink, told Lisa that "baseball is a game played by the dextrous but only understood by the poindextrous." He then showed Lisa his laptop, which featured a smiling Bill James.

"I made baseball as much fun as doing your taxes," said the revolutionary number cruncher.

Lisa then used James' philosophies as inspiration for leading Bart's team, and the great debate between statisticians and ballplayers played itself on an animated stage.

Hat tip to a former student who alerted me to this wonderful gem from statistician Bill James.

It's true--the same econometric statistical techniques that public finance economists use to analyze tax policy can also be applied to baseball.

However, I have a different take on Bill James' quote than most folks. I have long thought that taxes were far more interesting than baseball. Baseball only began to catch my attention after sabermetrics came along.
Posted by Mary O'Keeffe at 8:49 AM