Fourth commandment: thou shalt enter each and every box of thy taxpayer's W-2 data faithfully and verbatim. 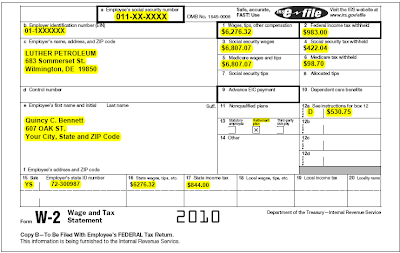 Fourth commandment: When thou usest tax software, thou shalt enter each and every box of thy taxpayer's W-2 data faithfully and verbatim.

There is a lot of important tax information embedded in a W-2, including some mysterious items that may not be obvious at first glance, so whenever you use tax software, you need to create a faithful verbatim electronic copy of the data in every box of the W-2.

If you do that meticulously, TaxWise should do the work of putting everything in the correct place on the Federal 1040 and NYS IT-201 tax forms, but it's important to understand WHAT you are doing and WHY you are doing it.

0) "Verbatim" is a slight exaggeration: you are allowed--and encouraged!--to round dollar amounts to the nearest whole dollar.  Also, the IRS computers are apparently allergic to punctuation, so do not include it.  (E.g., if the taxpayer or employer's name has an apostrophe in it--like mine--leave it out.  Otherwise, as I learned the hard way a decade ago, you run the risk of giving the IRS computers a bad case of indigestion.)

1) Not all W-2s are laid out in exactly the same way. Some W-2s are vertical, some are horizontal, some are large, some are small. What is key is matching up the box numbers, box by box.

3) Those mysterious letters and codes in Boxes 12 through 14 give important information about contributory retirement plans (e.g., 401(k)'s) and other fringe benefit compensation that may have special tax treatment. As an example, let's consider Quincy Bennett's W-2 above from the IRS Pub 4491W workbook. (You can click on the image to see a larger and clearer view.)

Mr. Bennett's W-2 shows in Box 12a that he contributed $531 to his traditional 401(k) plan at Luther Petroleum. (How do I know that? The mysterious Code D in Box 12a. You can read more about what W-2 codes mean here.) That contribution reduced his wages subject to income tax in Box 1 by $531, but it did not affect his Box 3 and Box 5 wages for Social Security and Medicare payroll tax purposes. It also reduced his Box 16 wages subject to state income tax by $531.

4) The information in Box 2, federal withholding, and Box 17, state withholding, is especially important! It is literally "money in the bank," because it represents money that the employer has withheld from the employee's pay that needs to be credited against his federal and state tax liability. If you accidentally omit that data input (it's especially easy to overlook the Box 17 information), you can literally give your poor taxpayer a heart attack by wrongly telling him he owes a lot of money, when in fact, he actually owes much less or may even be entitled to a refund.

5) UPDATE:  The Advance EIC is no longer an option.  It was eliminated 10 years ago.  Few taxpayers chose it (for reasons we will discuss in class) and it created more trouble than it was worth for some of those who did. A frequently overlooked item: "Advance EIC payment" in Box 9. For example, see Ms. Colby Bennett's W-2 below. (Again, click on the image for a clearer view.) There is $1,200 in Box 9. That tells me that me that--at her request, her employer, the William School District, included $1,200 of Advance Earned Income Credit (EIC) payments in her paychecks during the year. Effectively, her employer gave her an advance on part of her refund, and that advance needs to be subtracted from the refund she will get at the end of the year. If you enter the Box 9 information into the electronic W-2 in TaxWise, you should check to make sure that TaxWise puts that number into line 59 on the 1040. 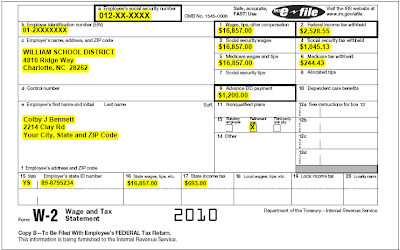 In effect, "Advance EIC" is a form of negative withholding. This complication rarely happens in real life--only about 1% of EIC recipients choose to collect some of it in advance, but when it does happen, it is essential to take it into account! It comes up far more frequently in IRS workbook exercises (and maybe the the certification exam!) than in real life. In the interests of tax simplification, the provision for Advance EIC is ending with the 2010 tax year, so this should be the last year we need to worry about this.
Posted by Mary O'Keeffe at 6:24 AM