effective vs. statutory rates duke it out

What does it take to get folks interested in a discussion of effective vs. statutory rates? I can see your eyes glazing over already. 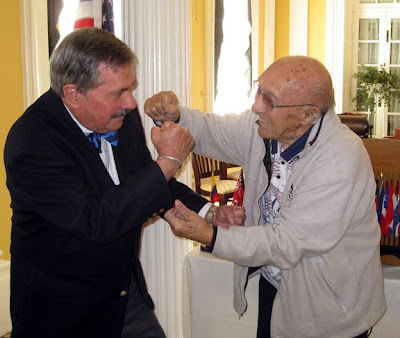 Schenectady is full of colorful characters. Shown above "duking it out" are Carl Strock, a sharp-tongued long-time Menckenesque columnist for our awesome local newspaper, The Daily Gazette, and former Schenectady Mayor Frank Duci, a legend in his own time. (Among former Mayor Duci's more "creative" ideas for local public finance: he once proposed buying lottery tickets in hopes of winning enough to close the gaping hole in the city budget. When asked why he appointed his stepson, an unemployed apprentice tile-layer, to run the Municipal Parking Authority, our former mayor cited the aforesaid stepson's 200 bowling average as evidence of his powers of concentration. Fortunately, Schenectady is no longer counting on such lottery luck or bowling scores. Our current Mayor, Brian Stratton, received a national award for excellence in public-private partnerships at last week's National Conference of Mayors, right before President Obama traveled with him up to Schenectady to speak at the newly revitalized GE turbine plant.)

But I digress: now that I've got your attention, I will quote from Carl Strock's Daily Gazette column today, because it does a great job of highlighting the important distinction I keep talking about with my students, the distinction between statutory and effective rates:

I did take note of Rep. Bachmann’s warning that the United States has “the highest corporate tax rate in the world,” and that we should “look no further to see why jobs are moving overseas.”

A ho-hum line that would be at home in any Republican stump speech, you might say, but it made a nice, if unintentional, fit with President Obama’s recent appointment of GE leader Jeff Immelt to chair an economic advisory council.

Republicans, Tea Partiers and Angry Ones in general have an affection for big corporations like GE that is hard to fathom, and President Obama might have seemed to be playing to them — moving to the center, as the commentators say — by appointing the head of GE to advise him on rescuing the American economy.

But what a choice.

GE last year paid a lousy 3.6 percent on $10.3 billion in profits; the year before it paid nothing and instead got a $1.1 billion credit.

Everyone knows that except possibly Rep. Bachmann and the Tea Party Express. I bet the president knows it.

The statutory corporate tax rate cited by the Tea Party is 35%.

But it's hard to fault GE for this. It is the fault of the tax code, not GE. GE's responsibility to its shareholders is to maximize their profits using all legal provisions in the tax code.

Google and Facebook pay even lower corporate tax rates than GE. Much of that effective tax rate manipulation can be done through accounting tricks that do not require actually moving jobs overseas, just manipulating paper profits through clever transfer pricing schemes that move the locus of accounting profits to low-tax countries where little or no actual production takes place, such as Bermuda or the Cayman Islands. Such strategems have colorful names like the "Double Irish" and the "Dutch sandwich."

It is not just low-income working families with children eligible for refundable credits who have effective tax rates lower than their statutory rates.

However, it is important to note that the huge divergence between effective and statutory rates all over the spectrum of individuals and corporations raises many issues of horizontal equity and vertical equity.

In the corporate sphere, the divergence also raises "level playing field" problems, since companies able to hire the most effective lobbying advocates for tax expenditure loopholes that favor them will have an advantage in generating after-tax profits.
Posted by Mary O'Keeffe at 8:11 AM