Sign of the times: last year's refunds went UP over 5% but the number of returns filed went DOWN over 1%

Tax journalist Kay Bell has been running a series of posts about the recently released IRS statistics on last year's filing season.

It's interesting to note that the average refund grew by 5% last year, but the number of returns filed was down 1% over the previous year.

It's easy to come up with explanations for the increase in the average refunds: the big home buyer tax credits and the new American Opportunity education credit likely increased refunds for many taxpayers. In addition, the economic downturn may have increased the number of taxpayers eligible for the Earned Income Credit. 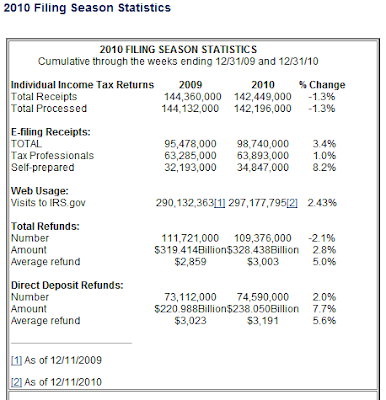