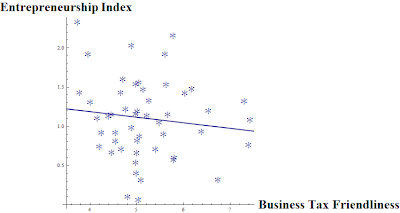 At the request of Calvin Johnson (University of Texas Law School), I have added a trendline to the plot of state datapoints on tax friendliness and entrepreneurship indicators in my last post. As you can see from the graph, the overall relationship is negative but very weak. (When I first eye-balled this, it seemed likely to be statistically insignificant, but to my surprise, after I quickly crunched the numbers, , though I think measurement error problems and omitted variables likely rule out any meaningfully practical significance. Correction: after a further check, the negative slope is, as I suspected originally, statistically as well as practically insignificant.)

There are clearly many omitted variables that influence entrepreneurship, some of which are likely correlated with the business tax climate. For example, states with higher business taxes might spend more on education than other states, which may be an important concern for some entrepreneurs.

There are also serious methodological difficulties in constructing any index to measure entrepreneurship. As my colleague Chris Chabris (Union College Psychology Department) pointed out, the use of patent data is problematic. Because patents are expensive to file and defend, a disproportionate share of patent filings are made by large established companies rather than small entrepreneurial businesses. So it is possible that there are many entrepreneurial inventions which are not showing up in patent data. In addition, it is possible that New York may be getting credited for patent filings made by New York City law firms, IP (intellectual property) specialists, on behalf of their client inventors located outside New York State, perhaps even outside the Unites States. Such inventors might find it convenient to give their address of record for patent filing purposes as an address "care/of" their New York attorneys.

The bottom line remains the same: the data provides no support for the conventional wisdom that "business-friendly" tax climates encourage entrepreneurship.
Posted by Mary O'Keeffe at 6:03 PM