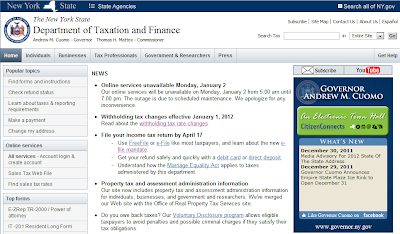 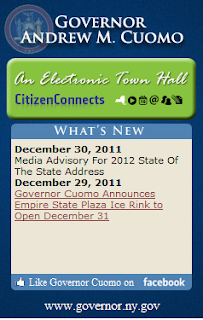 Governor Cuomo, you are not perfect (then again, none of us is), but I have to say that in your first year as governor, you have been more effective and constructive than any governor we have had since your dad left office in 1994.  I have no regrets about voting for you--the alternative was completely unacceptable.  You inherited a dreadfully dysfunctional state and you have accomplished a great deal more than I could have imagined possible.  You and I are in agreement that a great deal more needs to be done.

But that doesn't mean that I think it's right for the NYS Tax Department to use 20% of the prime real estate on their front page to promote your administration (screenshot above taken 12/31/2011, with closeup of the right-hand portion at right.)

And I especially don't think it's right for the NYS Tax Department to tell me to "Like" you on Facebook.

I can only imagine that outrage that would ensue if the irs.gov website devoted 20% of its front page to promoting President Obama's administration and if irs.gov instructed American taxpayers to "Like" President Obama on Facebook.

So I think the same ought to be true at the state level.  The tax department website is for helping citizens comply with their tax obligations, not for promoting the chief executive's Facebook page.

We know where to find information about you and your administration when we need it.  You are not exactly a publicity-shy guy.  We don't need the NYS Tax Department spending its limited resources helping us to find you.