Jan Pen, a Dutch economist who died last year, came up with a striking way to picture inequality. Imagine people’s height being proportional to their income, so that someone with an average income is of average height. Now imagine that the entire adult population of America is walking past you in a single hour, in ascending order of income.

The first passers-by, the owners of loss-making businesses, are invisible: their heads are below ground. Then come the jobless and the working poor, who are midgets. After half an hour the strollers are still only waist-high, since America’s median income is only half the mean. It takes nearly 45 minutes before normal-sized people appear. But then, in the final minutes, giants thunder by. With six minutes to go they are 12 feet tall. When the 400 highest earners walk by, right at the end, each is more than two miles tall. 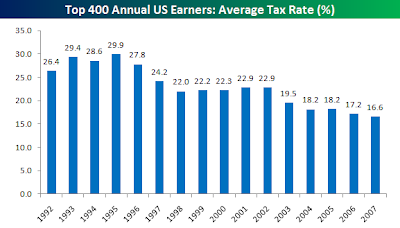 If we consider federal income and payroll taxes combined, there are many taxpayers eligible for VITA services (under $49,000 household income) who pay higher effective tax rates than the 400 highest income Americans.
Posted by Mary O'Keeffe at 5:28 AM