For the benefit of students preparing for tomorrow's exam, here is a model analysis.

1) Consider a free market with demand equal to QD = 1200 - 10P and supply equal to QS = 20P. Draw a clearly labelled graph of this market, showing equilibrium price, quantity, consumer surplus, and producer surplus on your graph.

Graphing the supply and demand curves gives us the following picture: 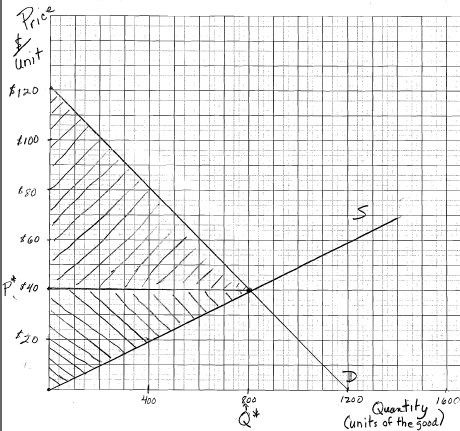 The consumer surplus is shown on the graph in the diagonally shaded upper triangle, the area between the demand curve (reflecting the consumers' valuation of the good) and the horizontal line drawn through the price the consumer actually pays for the good, $40/unit.

In the absence of externalities, standard economic analysis would say that the value to society of the production and consumption of the 800 units of the good created at the competitive market equilibrium is the "social surplus," the sum of the consumer and producer surplus values, or $32,000 + $16,000 = $48,000.


2) Now assume that the government imposes a $10/unit tax on the sale of the good.   How much of the tax will be paid by the buyer and how much by the seller?  How much tax revenue is raised?  What happens to the quantity of the good, consumer surplus, producer surplus.  How much is the deadweight loss?

Standard economic analysis says the incidence will be the same whether the statutory incidence is imposed on the buyer or on the seller.

For the sake of this example, we will place the statutory incidence on the buyer, so that every time he purchases the good, he must hand over $P/unit to the seller and $10/unit to the government.

Rounding to the nearest whole penny, we get P' = $36.67/unit as the new equilibrium price that the consumer hands over to the seller.  Rounding to the nearest whole unit, we get Q' = 733 as the new equilibrium quantity. We also note that the consumer is actually out of pocket $46.67/unit for each unit of the good that he buys, due to the $10/unit tax that he must remit to the government.

Thus, the economic incidence of the tax is that the consumer pays $6.67 per unit more than before, while the producers receive $3.33 per unit less than they did before. This is exactly what we would predict based on their relative elasticity of demand and supply computed at the original equilbrium point of (40,800).

Noting that elasticity is a unit-free measure and applying the formulas that define elasticity of demand and supply yields:

Because supply elasticity is twice as great as demand elasticity (in absolute value terms), we expect that buyers will bear twice as much of the tax as suppliers do, which is in fact the case! 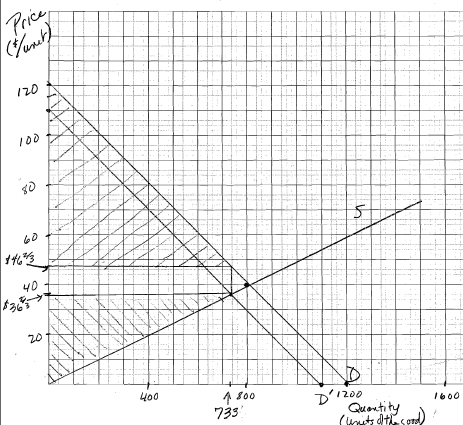 Notice that this is less than social surplus was before the tax was imposed by $335, which is the approximate amount of the deadweight loss caused by the tax, the area defined by the unshaded triangle in the center of the graph above, with height of $10 and width of approximately 67 units.

Suggested exercises to check your understanding:

A) Redo the analysis in part 2 above with the statutory incidence placed on the producer rather than on the consumer.   You should get the same answers (up to rounding error) for the total gross of tax price paid by the buyer, the net of tax price received by the seller, the new equilibrium quantity of the good, the amount of tax revenue collected, the consumer and producer surplus, and the deadweight loss.