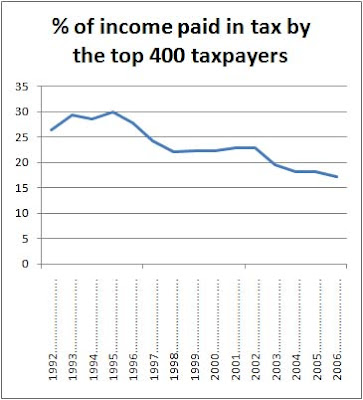 The graph above shows how effective average tax rates have changed over time for the 400 taxpayers with the highest adjusted gross income each year from 1992 through 2006.

Although the income of this group reached record high levels, their effective average tax rate fell to the lowest level since the IRS began tracking the group.

The top 400 taxpayers clearly face a much lower effective tax rate than many ordinary working Americans of much more modest means. This is largely due to the fact that most high income taxpayers take a large chunk of their income in the form of long-term capital gains and dividends, which are taxed at preferential rates compared to "ordinary income."

Taking payroll taxes (Social Security and Medicare) into account would make the contrast even starker, since most working Americans pay more in payroll tax than in income tax.
Posted by Mary O'Keeffe at 10:21 AM