What does it take to make the IRS top 400 list? 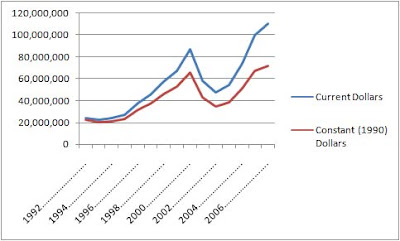 VITA sites serve low-income working families and senior citizens with incomes up to $40,000 per year.

The IRS, however, processes tax returns from taxpayers all across the income spectrum. Congress requires the IRS to release an annual study on the 400 tax returns with the highest Adjusted Gross Income.

The IRS just released its most recent report, for tax year 2006 (i.e, the returns due to be filed in 2007): it took an adjusted gross income of $111 million for a taxpayer to make the top 400 list that year.

$111 million a year--every taxpayer in the top 400 reported at least that amount of AGI on their tax return.

To put it another way, if you lined up a random cross-section of 50,000 VITA site clients from all over the country and added up ALL their income, it wouldn't total as much as the income going to JUST ONE taxpayer who happens to be in the #400 position on the IRS list!

The chart above shows trends in the cutoff figure for the top 400 list dating back to 1992.

It will be interesting to see what income it takes to make the list for tax year 2008--I suspect the figure will be down when the 2008 numbers are released in two years.

Reading the report makes for some very interesting contrasts with our VITA site taxpayers. Not surprisingly, a very large proportion of the income reported by taxpayers in the top 400 list comes in the form of capital gains, which are taxed much more lightly than other kinds of income such as wages, pensions, unemployment compensation, and bank interest, the types of income that VITA sites taxpayers typically report. Such taxpayers also take advantage of many other provisions of the tax code that would be totally alien and unfamiliar to our clients.

Interesting note: Table 3 of the IRS report on "Effective Average Tax Rates" reveals that 31 of the top 400 AGI taxpayers actually paid less than 10% of their income in federal taxes in 2006. Thanks to payroll taxes, many low and moderate income taxpayers pay a higher effective tax rate than that!
Posted by Mary O'Keeffe at 11:56 AM