Do you get what you pay for? Volunteer accuracy 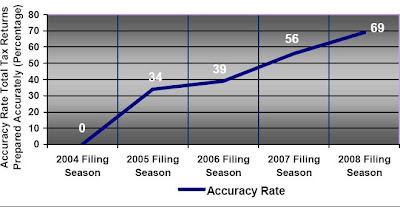 In 2004, "secret shopper" visits to VITA volunteer tax preparation sites resulted in a 100% error rate, according to this report released by the Treasury Inspector General's office.

As the graph above shows, subsequent studies have reduced the error rate at secret shopper sampled VITA sites to 31%, which is better than the 61% error rate found for commercial preparers, but still unacceptably high.

The two figures for volunteer and paid preparer are not directly comparable, since the secret shoppers used a wider variety of tax scenarios in their visits to commercial preparers, including some that involved more complex issues. However, if we look just at the two scenarios used in common at both the volunteer and paid preparer secret shopper audits: the error rate is 31% at volunteer sites vs. 64% at paid sites.

The latest report on accuracy at VITA sites is here.

The latest report on accuracy at commercial preparer sites is here.

On balance, paid preparer errors tended to favor the taxpayer with higher refunds than allowed. The reverse was true in the volunteer study.

At the volunteer sites, 11 out of 36 returns were prepared incorrectly, with 9 out of those 11 errors resulting in refunds that were too low. There were no reports of "willful" or deliberately "reckless" behavior at VITA sites. In every case in which an error was made, one or more VITA Quality Requirement guidelines were not followed:

For 1 tax return (9 percent), the volunteer did not
use an intake sheet when preparing the tax
return.

• For 3 tax returns (27 percent), the volunteers did
not correctly prepare the intake sheet.

• For 3 tax returns (27 percent), the sites had no quality review process.