Why is the IRS doing everybody else's job?

When he asked me what the latest book covered, I explained that it dealt with tax incentives for hiring and retaining employees. To his inquiry, "like what?" I rattled off the work opportunity credit, the Indian employment credit, the various disaster employee retention credits. He asked about the previous books. Those, I explained, dealt with tax incentives for energy production and conservation and with family and household transactions. Again, I listed some of the provisions, and he stopped me and asked why the tax law was filled with so many provisions that weren't a matter of revenue collection but expenditures. The answer is an easy one, because it's asked every semester by students in the basic tax course. Why not have the Department of Energy write checks to companies and individuals who are doing things to develop or conserve energy instead of administering the grants through tax refunds? Why not have the Department of Labor reimburse employers who hire members of targeted groups? The answer rests in the Congress' confidence with those other agencies and with the supposed speed with which tax refunds can put money in the taxpayers' hands in contrast to check-writing programs.

As Professor Maule points out, Congress has been loading more and more and more work onto the shoulders of the IRS. Originally, it was just asked to collect revenue for the government, and it's remarkably efficient at that purpose. In fiscal year 2008, the IRS spent an average of 41 cents to collect each $100 of tax revenue.

Just to take a few more examples beyond those listed by Professor Maule, the IRS administers:

* tax credits, exclusions, and deferrals for employee retirement savings under ERISA (IRS doing the work of the Department of Labor)

* tax credits, deductions, and exclusions for education
(IRS doing the work of the Department of Education)

* tax deductions, exclusions, and credits for health expenses
(IRS doing the work of Dept of Health and Human Services)

Over the years, Congress has piled more and more responsibilities on the shoulders of the IRS, but it has not given the IRS much additional funds to carry out these responsibilities. As a result, the IRS has been forced to reallocate some of the resources previously used for its traditional activities of enforcement and taxpayer assistance. For example, when Congress decided--on very short notice, in the middle of peak tax filing season!--to suddenly order the IRS to issue "Economic Stimulus Payments" to 130 million taxpayers, the IRS had to divert employees from other purposes, including enforcement, to dealing with the huge volumes of calls and correspondence from taxpayers asking about their stimulus payments.

Why is Congress asking so much of the IRS?

I guess it's a case of "no good deed goes unpunished."

The IRS is impressively efficient in getting tax refund checks out very promptly, probably faster than any other agency could do it. The IRS has a remarkably ambitious schedule for processing these returns. 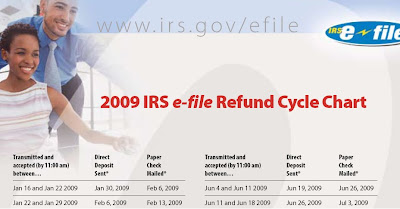 As the IRS schedule above shows, tax returns e-filed on Thursday morning can result in direct deposits of refunds 8 days later. If the taxpayer wants a check mailed instead of direct deposit, it will take an additional week. The IRS doesn't guarantee these dates (because sometimes a return will require extra scrutiny before the check is mailed), but the experience of taxpayers at our VITA site is that the IRS has been able to deliver promptly on their schedule 99% of the time. In the 1% of cases where there's been a delay, it's almost always been resolved within an additional week.

That's a very impressive track record, by any standard, private or public. Think about the last time you bought an item with a manufacturer's rebate offer, and you sent in the forms required to get the rebate. How long did it take to get your rebate money back in the mail? Probably slower than most IRS refunds.

I'm proud to say that the person in charge of all this speed and efficiency at the IRS is my former student, Dave Williams, who is now IRS Director of Electronic Tax Administration and Refundable Credits.

For several reasons, it's appropriate for the IRS to be speedy and efficient in processing legitimate tax refunds.

1) In most cases, the refund money is going back to people who overpaid their taxes through withholding. They've given the government an interest-free loan, and it's their right to get their overpayment back promptly.

2) In some cases, the refund money is going to low-income working families to whom Congress has promised, in essence, "matching money" for wages, in order to increase work incentives, education incentives, retirement savings incentives, and other things that Congress has deemed worthy. These refundable credits were designed to help people take steps towards getting off traditional welfare (the old AFDC now relabelled as TANF) and into jobs that will hopefully lead to self-sufficiency. The legitimate recipients of these credits face many economic hardships, and Congress wants them to get these credits in a timely and predictable way.

3) In still other cases, Congress has decided that the IRS should be delivering refundable tax credits to stimulate the economy. Economists don't always agree about whether a stimulus is needed, but there is general agreement that IF one is needed, it ought to be delivered in a timely way. The IRS is the only government agency with the track record and infrastructure in place to deliver the stimulus fast, either by issuing rebate checks or by instructing employers to modify withholding schedules.

All this is a lot to pile on to the shoulders of the IRS. They're not perfect (and, who among us is), and surely there are some bad apples there, but the American people, via their elected representatives, have piled a lot of work onto the IRS. By piling on all these other responsibilities, the American people haven't given the IRS the resources it needs to do its traditional job of adequately scrutinizing, deterring, and/or catching the dishonest taxpayers and dishonest tax preparers who have exploited the weaknesses in the IRS system.

A variety of data shows that the majority of American taxpayers comply remarkably well with their tax laws, especially considering the complexity, and especially compared to many other countries. (In some countries, cheating the government seems to be something of a national sport, unfortunately! But not here.) It's right that taxpayers legitimately entitled to refunds should get their money back promptly, but the IRS also needs the resources to catch the illegitimate returns filed by the dishonest--or even better, to deter people from filing illegitimate returns in the first place.

Finally, in this year's budget, the IRS is getting a significant increase in enforcement resources (to catch and deter the dishonest) and in taxpayer assistance (to help the honest understand their tax obligations and comply with the law.)

But, Congress could do a LOT more to make the IRS job easier and more straightforward. All the unnecessary complexity in the tax law makes the IRS waste a lot of its time (and taxpayers' time too!) on trivial minutiae with no possible public policy purpose.

Reasonable people can differ about whether encouraging higher education and retirement savings are legitimate public policy objectives, and, if so, whether the IRS is the right agency to administer government programs to encourage those goals. But no sane person can explain why the government should have such a convoluted and unnecessarily complex tax code with 16 different tax incentive programs to save for retirement and 11 different incentive programs for higher education, all with slightly different rules, as the National Taxpayer Advocate Nina Olson has pointed out.

And it's not the IRS fault they spend that much time. It's primarily Congress fault--they are the ones that write the laws. And, ultimately, it's our own fault for not sending Congress a clearer message that we don't appreciate all the time that the overlapping and convoluted provisions of the tax code it writes is making us waste so much time and money on compliance--and making the IRS waste its resources as well.

On their end, the IRS has about 80,000 full-time and 10,000 seasonal employees to do their part of tax administration, trying to keep up with all the responsibilities that Congress heaps on it--creating and updating forms and instructions as Congress changes the law each year, doing taxpayer outreach and education to help them comply, answering taxpayer questions, processing their returns, collecting payments, issuing refunds, catching honest errors, auditing returns, trouble-shooting difficult cases, and more.

Congress, you've been complaining about all the fine print and hidden "gotcha's" in credit card agreements, mortgage contracts, and health insurance applications--and rightly so, in my opinion. Consumers deserve to have a clearer picture of what they are getting into when they sign one of those forms.

But, Congress, you ought to lead by example and clean up your own house as well--and simplify all the unnecessary fine print in the tax code! That would make it easier for honest taxpayers to comply and it would also enable the IRS to devote its resources and formidable efficiency to more important priorities--like assisting the honest and catching and deterring the dishonest who take advantage of the honest.

Congress, if you're going to make the IRS do everybody else's job, please do YOUR part to be efficient about it when you write the tax code!
Posted by Mary O'Keeffe at 6:16 AM