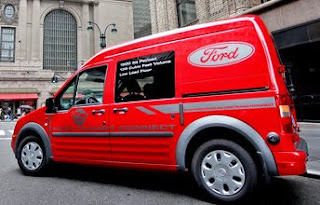 Taxprof Paul Caron linked a Wall Street Journal article that provides a great example of the deadweight loss of taxation.
To Outfox the Chicken Tax, Ford Strips Its Own Vans

BALTIMORE -- Several times a month, Transit Connect vans from a Ford Motor Co. factory in Turkey roll off a ship here shiny and new, rear side windows gleaming, back seats firmly bolted to the floor.

Their first stop in America is a low-slung, brick warehouse where those same windows, never squeegeed at a gas station, and seats, never touched by human backsides, are promptly ripped out.

The fabric is shredded, the steel parts are broken down, and everything is sent off along with the glass to be recycled.
Why all the fuss and feathers? Blame the "chicken tax."
The seats and windows are but dressing to help Ford navigate the wreckage of a 46-year-old trade spat. In the early 1960s, Europe put high tariffs on imported chicken, taking aim at rising U.S. sales to West Germany. President Johnson retaliated in 1963, in part by targeting German-made Volkswagens with a tax on imports of foreign-made trucks and commercial vans.

The 1960s went the way of love beads and sitar records, but the chicken tax never died. Europe still has a tariff on imports of U.S. chicken, and the U.S. still hits delivery vans imported from overseas with a 25% tariff. American companies have to pay, too, which puts Ford in the weird position of circumventing U.S. trade rules that for years have protected U.S. auto makers' market for trucks.

The company's wiggle room comes from the process of defining a delivery van. Customs officials check a bunch of features to determine whether a vehicle's primary purpose might be to move people instead. Since cargo doesn't need seats with seat belts or to look out the window, those items are on the list. So Ford ships all its Transit Connects with both, calls them "wagons" instead of "commercial vans." Installing and removing unneeded seats and windows costs the company hundreds of dollars per van, but the import tax falls dramatically, to 2.5 percent, saving thousands.

This is a classic example of deadweight loss. The resources that got used up in putting the windows and seats in and then taking them out, solely for the purposes of doing an end run around the tax code, created no real value for anyone--they represent pure economic waste.

Sure, the bottom line for Ford was that its tax bill got cut, and it was perfectly rational from Ford's point of view to do this maneuver. But Ford's gain was just a pure transfer of assets between the Treasury and Ford, not a net real economic gain for society as a whole.

The bottom line for society as a whole was a net loss equal to the cost of putting the seats and windows in and taking them out--a deadweight loss.
Posted by Mary O'Keeffe at 2:04 PM