Why does the government like to single out beverages for taxation so much?

Yesterday's San Francisco Chronicle reported that Mayor Gavin Newsom is joining the list of politicians calling for a soda tax, citing a new UCLA study on soda consumption and obesity:

"Soda is cheap, sweet and irresistibly marketed to teens," said Susan Babey, the study's lead author. "Not enough teens know about the health and dietary risks of drinking huge quantities of what is essentially liquid sugar." San Francisco would be the first city in the country to levy a fee on soda if, as expected, it is approved by the board. A handful of states, including Arkansas and Missouri, tax sodas, and California has considered the idea in the past. A soda tax has also come up in the national debate about health care reform as one way to help pay to insure more people.

The soda tax debate has gotten me musing once again--why does the government like singling out beverages so much for taxation?

Taxes on tea, taxes on whiskey, taxes on alcohol, all of them have played a vivid and memorable part in our nation's history, and all of them really riled up the taxpayers. 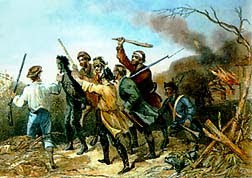 We have all grown up with images in our head of infuriated colonial tax protesters throwing bales of tea overboard in Boston, angry farmers tarring and feathering federal revenue agents during the Whiskey Rebellion (shown in the picture above), and struggles in the backwoods of Appalachia between "revenooers" and "moonshiners."

With all the popular uproar about beverage taxes in the past, why are government officials considering taxing soda?

Equity argument: Soda is not a necessity and it's easy to avoid paying the tax by changing to other beverages, including tap water, so taxing soda doesn't impose the same kind of hardship on the poor that a tax on a necessity or a broader-based and harder to avoid tax would impose.

Economic efficiency argument: This is the most controversial argument, because it relies on three debatable propositions.

If (1), (2), and (3) are all true, then there is an externality argument for a tax on soda. This would be an example of a Pigovian tax, a tax that corrects for a case in which the social marginal cost of a good is greater than the private marginal cost of the good.

But these equity and economic efficiency arguments are hardly unique to soda--you could make a similar case for taxing other non-beverage junk foods as well.

There's another important argument that doesn't get cited as much, but I think it's an important one in actual practice.

Administrative practical convenience argument: Most states already have bottle bill deposit laws which have caused retailers to create accounting systems that make it relatively easy to single out soda for taxation.

If we think about the history of the tea tax and the whiskey tax and federal excise taxes on alcohol in general, there were probably similar practical administrative arguments for choosing those tax bases.

There's also the big question of the relative power of special interest lobbies. One might argue that it would make more sense just to impose big taxes on sugar and corn syrup, rather than soda, but that would mean taking on a different set of lobbyists.
Posted by Mary O'Keeffe at 6:53 AM