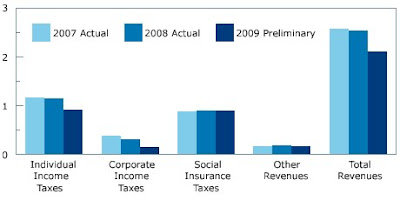 National income and employment have fallen over the past year. As the graph above shows, personal and corporate tax collections have declined, but payroll taxes (Social Security, Medicare, unemployment taxes) are holding steady, slightly increasing.

It's an interesting mystery as to why payroll taxes are holding so steady, given that overall income is down, employment is down, and other tax collections are down. Looking into those reasons can tell us quite a lot about the structure of our tax system, including aspects most Americans rarely think about.

Income taxes are highly visible--or as behavioral economists would say: "salient." However, for most working Americans, the less visible payroll taxes are a much heavier burden than income taxes. This has been true for quite some time. In 2007, the Urban Institute reported that two-thirds of taxpayers filing tax returns had paid more in payroll taxes than in income tax. This will probably been even more true when the 2009 final numbers come in.

Even though the average working American pays more in payroll tax than income tax, few Americans pay much attention to payroll taxes. Because the payroll tax is so simple, there's no need for wage-earners to file a payroll tax return. The amount of tax doesn't depend on anything other than wages, no need to consider dependents, deductions for mortgage interest, tax credits, etc. Employers simply take the money right out of their paychecks and sends it in to the government, without much fuss or muss visible to the employee.

The self-employed DO notice the payroll tax, because they are responsible for filing and paying their own payroll taxes. Business owners also notice the tax, because they are the ones actually responsible for remitting the taxes to the government on behalf of their employees, but ultimately the burden of the taxes falls on employees because it results in decreased take-home pay for them.

Payroll taxes are regressive, because they only fall on wage income, and many higher income individuals have found creative ways to legally recharacterize what most people would think of as wage income into non-wage income. For example, hedge fund managers are famous for taking much of their employee compensation in the form of "carried interest," which is not subject to payroll taxes, and, in addition, may even qualify for favorable income tax treatment subject to taxation at the preferred rates given to long-term capital gains.

The ceiling amount goes up a little bit every year. We'll learn soon what the number will be for 2010. The Social Security Administration website has a history of the ceiling numbers going back to the beginning of Social Security in 1937, when the cap was $3,000. Here are the numbers for recent years:

The gradually increasing cap on wage income subject to Social Security tax could be the reason that payroll taxes have been able to hold steady, despite the decrease in employment and national income in general.

UPDATE: On October 15, 2009, the Social Security Administration announced that the cap for 2010 will remain unchanged at 106,800. This is the first time since the indexation formula went into effect in 1975 that the cap did not increase.
Posted by Mary O'Keeffe at 11:24 AM