Regardless, analysts say New York, like many states, is considered a good risk for repayment. "It's a state that has a huge resource base," said David Hitchcock, a bond analyst with Standard & Poor's rating service. "It has a strong capacity to repay.

Hmmm, Standard & Poor's rating service. Those are some of the same folks who did such an "accurate" job of rating some of the subprime collateralized debt obligations (CDO's) as AAA that the states of Connecticut and Ohio are currently suing them for damages, claiming that the bond rating agencies "were the enablers to this structured finance debacle."

For what it's worth, today's Times Union also published the following chart showing S&P bond ratings for all 50 states. 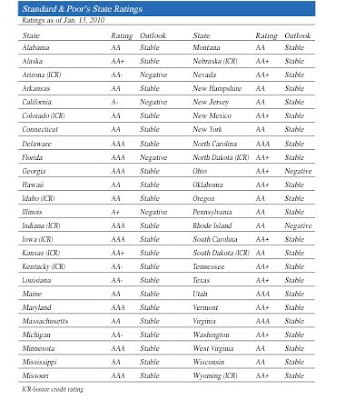 The one bright note on the horizon: New York Lieutenant Governor Richard Ravitch is working hard to put New York State's finances into better order, including--finally!--conforming to "Generally Accepted Accounting Practices" (GAAP.) If done right, this would end the "stupid pet tricks" financial gimmicks of the past--no more shoving invoices into a drawer to roll them into the next fiscal year, for example. The New York Times reports:

ALBANY — New York could borrow billions of dollars to address its urgent budget shortfall and a financial review board would be established to impose new discipline on future spending under a five-year financial rescue plan that Lt. Gov. Richard Ravitch will present Wednesday.

The plan would also require significant spending cuts and abolish some of Albany’s much-criticized budgeting practices, forcing lawmakers and the governor to account for how they will pay for spending expansions when they are approved.

Mr. Ravitch, who was asked by Gov. David A. Paterson to draw up the blueprint, is seeking to curb the runaway spending that has helped plunge New York into fiscal crisis. Despite the recession and talk of fiscal austerity, state spending this year soared by 10 percent over the previous year’s budget.

The state faces a $9 billion shortfall for the fiscal year that begins April 1 and a $15 billion gap for the following year.

The plan, which requires legislative approval, seeks to address New York’s immediate cash needs by permitting the state to sell bonds to help cover operating expenses. But those bonds would be contingent on the state’s producing a balanced budget, and the newly established board would have the authority to determine whether the budget meets that requirement.

In addition, the plan would limit how much could be borrowed — probably 1 percent or 2 percent of the total budget, so lawmakers do not rely on borrowing to shirk difficult decisions on spending cuts, though any increase in borrowing will be controversial.

It would represent drastic change to how Albany has operated for decades. But the severity of the fiscal problems, and Mr. Ravitch’s stature as one of the leading figures in the rescue of New York City in the 1970s, have legislative leaders and other top state officials examining the proposal seriously.