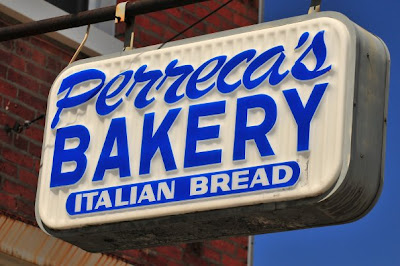 Maria and Anthony Perreca-Papa are artisans. They run a family owned bakery in the "Little Italy" neighborhood of Schenectady, just a few blocks from our VITA site.

Perreca's Bakery is one of the treasures of Schenectady. Legend has it that actor Jack Nicholson discovered this bread when he was in this area filming a movie decades ago (long before the days of movie tax credits!) and that he was so captivated by its excellence that he still has it delivered on a regular basis.

I have no way to confirm whether that story is still true, but I can tell you for sure that many of the finest restaurants all over this area boast that they get their bread from Perreca's. But it's absolutely best bought and eaten in the small cafe right on the premises of the bakery.

Their prices are very reasonable, yet the quality is superb, because the family that has run the place for almost a century takes enormous pride in their work. (They have been in business since 1913, the same year the 16th Amendment paved the way for the income tax!)

The bread wrappers, T-shirts, signs and other Perreca’s paraphernalia note that the business dates from 1914, but “that’s not exactly true,” says Maria Perreca-Papa. “My grandfather actually started the store in 1913, but later he was too superstitious to say it was that year.” Perreca-Papa and her brother, Anthony, are the third generation to own and run the business. Source: Metroland

A blogger called "Forgotten Buffalo" (no relation to me, just an Upstater from Buffalo, NY way over on the far side of the state) has a post on his blog with great photos that show how Perreca's still uses their 80-year-old coal-fired oven and time-tested old world techniques to make bread that truly deserves the title "artisanal." Old-fashioned technology and devoted bakers who know their craft and pursue it with a passion for excellence make a product that is a really special treat.

Wandering Tax Pro Robert Flach still clearly devotes the same kind of pride to the carefully hand-crafted tax returns he meticulously prepares for his customers. As he puts it, " My handwritten returns have been called “a work of art” by both the IRS and other tax practitioners."

I admire and respect his devotion to his craft, as I'm sure his customers do as well. Preparing accurate tax returns is hard and often thankless work, and if working by hand makes him happier, so be it. He says he has more business than he can handle from his loyal clientele. Apparently, his clients are perfectly happy to file his handwritten paper returns.

If I lived in his neck of the woods, and if I needed a paid preparer, and if he were accepting new clients, I would certainly not be deterred by his refusal to use technology. His blog has demonstrated to me that he is knowledgeable and conscientious in keeping up with tax law, and I would certainly prefer his work to that of many commercial preparers who use software without actually fully understanding what the program is doing when they enter the numbers.

If I were Robert's client, I would certainly not want to push him to use tax software that he dislikes. (On the other hand, if I were anyone's client, I would insist on running the numbers myself through my own choice of software before allowing it to be filed, regardless of whether that preparer used software or not! I prepare my own tax return and I typically do it in two different software packages to cross-check, and I also walk through the logic and math of the return line by line before filing. I insist on fully understanding what is in my tax return before I sign it.)

So long as the regulations provide an easy and straightforward way for Robert's clients to exercise their right to "opt out," I see no problem with a regulation that says that tax professionals must efile unless they obtain signed consent from the taxpayer to do otherwise.

However, if Robert's clients ever decide that they would prefer to efile a return that he has prepared for them, perhaps because they need their refunds to arrive faster, it seems to me that those taxpayers do have the right to use the IRS Free File system to input the numbers on the paper returns he has prepared for them rather than mailing it in. (Note that the "Free Fillable Forms" option is available to taxpayers regardless of income. Using the "Free Fillable Forms" makes it very easy to transcribe the information from Robert's hand-written paper returns into the computer.)

Just because a taxpayer consults a preparer for tax advice does not mean that the taxpayer is automatically required to file the exact documents his preparer has prepared for him. The taxpayer is free to treat the document as "advisory" and use it as an input to a self-filing process, or, for that matter, to take it to another practitioner for a second opinion and/or efiling.

There are probably even fewer "artisan tax preparers" like Robert Flach than there are artisan bakers like Maria and Anthony Perreca-Papa, but it seems to me that the regulations should provide a straightforward way for a few Robert Flachs to continue doing taxes the old-fashioned way, as long as they and their clients want to do so.

Personally, however, I think it's more fun to eat Perreca's bread than to file a tax return, artisanal or otherwise!

I will making a standing offer to any of my colleagues in the tax blogosphere: if you are ever in the Albany-Schenectady-Saratoga Springs-Troy area, do let me know and I'll happily take you to breakfast or lunch at Perreca's. (They don't serve dinner.) The bread is completely out of this world. They also serve a heavenly cold tomato pie at lunch time and a fantastic eggs in purgatory at breakfast.
Posted by Mary O'Keeffe at 6:58 AM