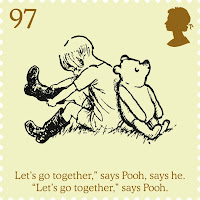 “We are all going on an Expedition,” said Christopher Robin, as he got up and brushed himself. “Thank you, Pooh.”

“Going on an Expotition?” said Pooh eagerly. “I don't think I've ever been on one of those. Where are we going to on this Expotition?”

“It's just a thing you discover,” said Christopher Robin carelessly, not being quite sure himself.

“Of course they are. And Rabbit and Kanga and all of you. It's an Expedition. That's what an Expedition means. A long line of everybody. You'd better tell the others to get ready, while I see if my gun's all right. And we must all bring Provisions.”

“Oh!” said Pooh happily. “I thought you said Provisions. I'll go and tell them.” And he stumped off.

So Pooh trots off and goes to Rabbit's house first to tell him about the "expotition."

“We're all going on an. Expotition with Christopher Robin!”

Pooh next heads over to recruit Piglet for the expotition:

“Oh! Piglet,” said Pooh excitedly, we're going on an Expotition, all of us, with things to eat. To discover something.”

“To discover what?” said Piglet anxiously.

“Christopher Robin didn't say anything about fierce. He just said it had an 'x'.”

“It isn't their necks I mind,” said Piglet earnestly. “It's their teeth. But if Christopher Robin is coming I don't mind anything.”

And so they assemble:

In a little while they were all ready at the top of the Forest, and the Expotition started. First came Christopher Robin and Rabbit, then Piglet and Pooh; then Kanga, with Roo in her pocket, and Owl; then Eeyore; and, at the end, in a long line, all Rabbit's friends-and-relations.

“I didn't ask them,” explained Rabbit carelessly. “They just came. They always do. They can march at the end, after Eeyore.”

“What I say,” said Eeyore, “is that it's unsettling. I didn't want to come on this Expo—what Pooh said. I only came to oblige. But here I am; and if I am the end of the Expo—what we're talking about—then let me be the end. But if, every time I want to sit down for a little rest, I have to brush away half a dozen of Rabbit's smaller friends-and-relations first, then this isn't an Expo—whatever it is—at all, it's simply a Confused Noise. That's what I say.”

“I'm not asking anybody,” said Eeyore. “I'm just telling everybody. We can look for the North Pole, or we can play 'Here we go gathering Nuts and May' with the end part of an ants' nest. It's all the same to me.”

There was a shout from the top of the line.

“We're starting,” said Rabbit. “I must go.” And he hurried off to the front of the Expotition with Christopher Robin.

So many great analogies between the Tea Party movement and Winnie-the-Pooh's Expotition to the North Pole. A lot of people joining the movement without really understanding what it's about, different people with different agendas, interestingly inconsistent and incoherent definitions of what the movement is ("a long line of everybody," "a boat?", "a pole or a mole?", "a confused noise") and people eager to lead the movement without being entirely sure what it stands for or where it is going.

But, anyway, like Pooh, they are going to "discover" it when they get there. And they can put up a big sign and declare victory. 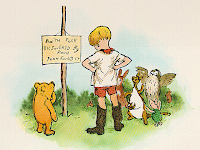