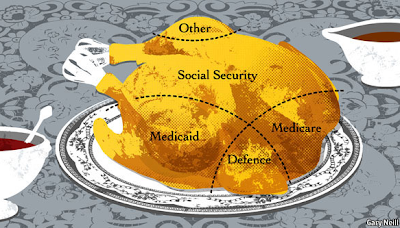 The current issue of the Economist gives us a succinct and crystal clear summary of the history of the budgetary mess we Americans have allowed our leaders to get us into, as well as the tough proposals from President Obama's bipartisan deficit reduction panel to get us out of it. 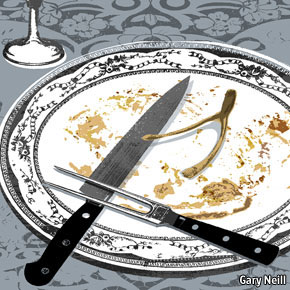 The proposals aren't going to be easy to swallow. But the alternatives are bleak. The Economist article ends on a pithy quote from Pete Domenici:

A fan of military metaphors, he calls the current challenge the greatest the country has faced since Pearl Harbour. “America is on the threshold of potential economic devastation,” he says. “The day of infamy is close.” The big difference, however, is that the public doesn’t know it yet. “It’s not like they bombed Hawaii.”

An apt metaphor: if we stay on our present course, we are headed for government debt even higher than the historic all-time levels we faced in World War II....but with no clear end in sight. 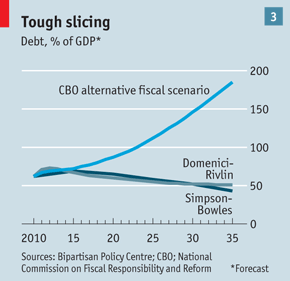 As Walt Kelly famously said: "We have met the enemy and he is us."

It is easy for us to complain about this, that, and the other thing we may not like about the Simpson-Bowles and/or Domenici-Rivlin proposals, but the fact is that the status quo (shown in the blue line in the graph above) is simply untenable.

Here is how the Economist sizes up the situation:

The scale of America’s fiscal problem depends on how far ahead you look. Today’s deficit, running at 9% of GDP, is huge. Federal debt held by the public has shot up to 62% of GDP, the highest it has been in over 50 years. But that is largely thanks to the economy’s woes. If growth recovers, the hole left by years of serial tax-cutting and overspending can be plugged: you need to find spending cuts or tax increases equal only to 2% of GDP to stabilise federal debt by 2015. But look farther ahead and a much bigger gap appears, as an ageing population needs ever more pensions and health care. Such “entitlements” will double the federal debt by 2027; and the number keeps on rising after then. The figures for state and local debt are scary too.

The solution should start with an agreement between Mr Obama and Congress on a target for a manageable level of publicly held federal debt: say, 60% of GDP by 2020. They should also agree on the broad balance between lower spending and higher taxes to achieve this. This newspaper believes that the lion’s share of the adjustment should come on the spending side. Entitlements are at the root of the problem and need to be trimmed, and research has shown that although spending cuts weigh on growth in the short run, they hurt less than higher taxes. And in the long run later retirement and other reforms will expand the labour force and thus potential output, whereas higher taxes dull incentives to work and invest.

Yet even to believers in small government, like this newspaper, there are good reasons for letting taxes take at least some of the strain. Politically, this will surely be the price of any bipartisan agreement. Economically, there is sensible room for manoeuvre without damaging growth. American taxes are relatively low after the reductions of recent years. In an ideal world the tax burden would be gradually shifted from income to consumption (including a carbon tax). But that is politically hard—and there is a much easier target for reform.

America’s tax system is riddled with exemptions, deductions and credits that feed an industry of advisers but sap economic energy. Simply scrapping these distortions—in other words, broadening the base of taxation without any new taxes—could bring in some $1 trillion a year. Even though some of this would have to go in lowering marginal rates, it is a little like finding money behind the sofa cushions. The tax system would be simpler, fairer and more efficient. All this means that America can sensibly aim for a balance between spending cuts and higher taxes similar to the benchmark set by Britain’s coalition government. A ratio of 75:25 is about right.

There is legitimate concern that, done hastily, austerity could derail a weak recovery. But this strengthens the case for a credible deficit-reduction plan. By reassuring markets that America will control its debt, the government will have more scope to boost the economy in the short term if need be—for instance by temporarily extending the Bush tax cuts.

It will take courage for our President and our Congressional leaders to make these tough changes happen, especially in these Tea Party days. The proposals on the table rely far more on spending cuts than on tax increase, but it's unrealistic to cut the deficit and debt with out at least some tax increases--and cutting tax loopholes ("bed buffaloes") is the economically efficient way--if politically painful--way to do that.
Posted by Mary O'Keeffe at 7:34 AM