Checking in on the "competition" 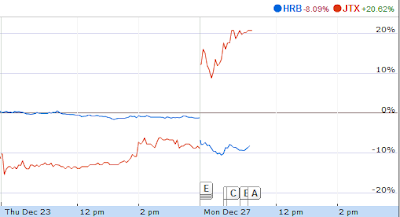 H&R Block (HRB), by far the largest commercial tax prep firm in the country, saw its stock price fall by 8% over the weekend, while its smaller competitor, Jackson Hewitt (JTX) climbed by over 20%.

The story behind the price move is available in an HRB press release here:

KANSAS CITY, MO -- (Marketwire) -- 12/24/10 -- As a result of a regulatory directive by the Office of the Comptroller of the Currency ("OCC"), HSBC has given notice to H&R Block that it is immediately terminating the parties' long-term contract under which HSBC provided all of H&R Block's refund anticipation loans ("RALs") and some of its refund anticipation checks ("RACs"). As a result, HSBC will no longer provide RALs or RACs to H&R Block clients. At the same time, HSBC's exclusive right to provide such products has also ended, thereby enabling H&R Block to enter into other partnerships for financial products that were previously precluded. The contract termination is the result of a directive from the OCC, HSBC's banking supervisory agency, immediately prohibiting HSBC from offering any form of RALs.

Prior to the OCC's recent action, H&R Block and HSBC had reached agreement on a proposal that would have allowed HSBC to honor its contractual obligations to H&R Block during tax season 2011. Under the revised terms agreed upon by both parties, H&R Block would have in effect covered essentially all credit defaults experienced by HSBC, thereby making H&R Block's credit rather than the taxpayer's refund the ultimate source of repayment to HSBC. The proposed new terms would have made it nearly impossible for HSBC to suffer any financial losses.

"Nearly impossible for HSBC to suffer any financial losses" is an interesting phrase for HRB to use in its press release, given the losses their own company has suffered.

Even before this weekend's precipitous drop, HRB stock was already down 44% for the year, and S&P credit raters were not ruling out the possibility that HRB debt (currently rated BBB and teetering precariously just above the "junk" level) might be downgraded. It is easy to see why HSBC might have wanted to find a reason to be excused from the deal it had previously made with HRB.

Meanwhile, Republic Bank apparently remains committed to offering RALs to Jackson Hewitt customers. (It is not clear why the Comptroller of the Currency continues to allow Republic to be involved in the RAL business, but Republic is a much smaller bank than HSBC, so perhaps its failure would be less of a threat to the overall financial system. In addition, Republic is not a national bank, and there is an ongoing controversy over whether national regulators can preempt state bank regulations.)

In other developments, Jackson Hewitt is developing a snazzy-looking new website, MyTaxManager, which will encourage its customers to rely on them for far more than just once a year tax filing. It appears that Jackson Hewitt will be encouraging their customers to upload their tax related receipts and other financial documents to the MyTaxManager website throughout the year, so that JTX preparers will have all the documents organized and at their fingertips when the taxpayer is ready to file. 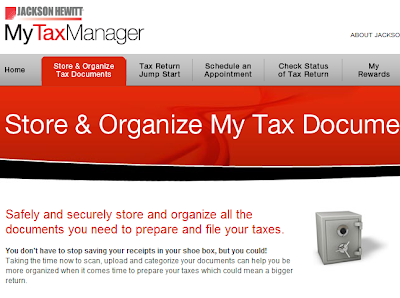 This is an interesting marketing strategy, especially for taxpayers with disorganized financial lives. In the wake of evictions, foreclosures, and homelessness, it is understandably difficult for taxpayers to hang on to all the financial documents they may need, so a service like this one is a seemingly good idea--in principle. Taxpayers could possibly even use their cellphone to snap a photo of a tax document and upload it to the Jackson Hewitt website.

Unfortunately, the precarious financial state of Jackson Hewitt itself suggests that the company's website may not be the most reliable place to store one's financial documents.

Personally, I would want to be extremely cautious before choosing to store all my sensitive financial documents in a single electronically accessible location--and a company with Jackson Hewitt's financial track record does not inspire my confidence. Their 52-week stock price volatility has ranged from a low of 75 cents per share to a high of $5.14 per share. They have been bleeding money with large operating losses over the past year, and their balance sheet debt currently exceeds their assets, which means they are technically insolvent. At the moment, Jackson Hewitt is operating on a life-support line of credit extended by a reluctant Wells Fargo.
Posted by Mary O'Keeffe at 8:12 AM