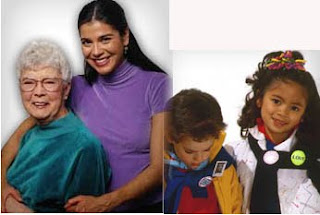 Odessa Parks is divorced and lives with her son and daughter. Odessa pays for all the household expenses, all the support of her children, and most of the support for her elderly mother, Angie, who also lives with them.

Odessa earned $30,612 as a customer service rep and she also collects Social Security widow's benefits of $8,250 based on her first husband's earnings record. She had no other income.

Her complete annotated Intake and Interview form and tax documents are available here.

Her filing status is Head of Household (HoH), due to the fact that she pays more than half of the cost of keeping up the home for herself and at least one qualifying dependent. She can claim four exemptions on her return, one for herself, two for her Qualifying Children (QC) Corey and Asia, and one for her Qualifying Relative (QR), Angie. She will also be able to claim her two children as "Qualifying Children" for Earned Income Credit and for Child Tax Credit.

Her actual tax return is here.

She had no above-the-line deductions ("adjustments"), so her adjusted gross income on line 37 is also $35,363.

She is entitled to $2,000 in child tax credit. The first $1,259 of that credit wipes out her tax liability down to zero, so we enter that in line 51 as a "nonrefundable credit."

Her tax liability is now zero.

But, again as they say on late night TV, "Wait! There's more!"

If we consider her payroll tax (FICA contributions for Social Security and Medicare) as well, and use the standard CBO assumptions about payroll tax incidence, her total federal effective average tax rate is actually a positive 7%.

To see that, let's imagine she got an additional thousand dollars worth of income. If that income came in the form of wages, her total federal tax bill (income and payroll tax combined) would increase by about $820, giving Odessa an effective marginal tax rate of 82%!

Other taxpayers will often have effective marginal tax rates that differ a good bit from their statutory marginal rates--in both directions. We will talk about this more in class.
Posted by Mary O'Keeffe at 6:22 PM