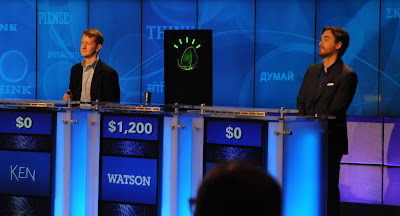 If Federal and New York State officials worried about ballooning deficits tune in to Jeopardy this coming week, they should be cheering for the humans! The US and New York State Treasury will collect four to five times as much income tax revenue if the computer comes in last.

On the other hand, human beings like Ken Jennings and Brad Rutter, would be far more likely to hit the limit on deductible donations if they were to donate the full amount of their winnings to charity. Those rules are complicated and depend on the type of charity, so Ken Jennings and Brad Rutter should definitely read those IRS rules in Pub 526 carefully before deciding which charities should get their donations. (Ken Jennings may also want to make use of his free lifetime tax advice from H&R Block by asking their opinion as well.)

Here are some back-of-the envelope calculations, using 2010 federal and NY tax rates. (As usual, we will make some simplifying assumptions. We'll ignore other income and deductions aside from charitable donations and state tax that Mr. Jennings and Mr. Rutter might have, assuming their other deductions will wipe those out. To make life simple, we will also assume they both use married filing joint tax status. I believe that Mr. Jennings is married. I am not sure if Mr. Rutter is married, but--if not--he still has until December 31 to get married to a spouse with no taxable income of her own if he'd like to minimize his taxes. These assumptions are reasonable first approximation assumptions. Refining those assumptions would most likely strenghthen the argument even further.)

If Watson wins:
million dollars goes to charity of IBM's choice
zero tax revenue to US and NYS

If Watson takes second:
$300K goes to charity of IBM's choice
zero tax revenue to US and NYS

If Watson takes third:
$200K goes to charity of IBM's choice
zero tax revenue to US and NYS

If Watson comes in first, US government gains about $40K in revenue while New York State gets about $16K in revenue.

If Watson comes in last, US government gains about $165K in revenue while New York State gets about $80K in revenue.

So Watson losing will generate four to five times as much tax revenue as Watson winning.
Posted by Mary O'Keeffe at 7:57 AM