After reading recent coverage in the New York Times, I have my doubts.  Taxes on self-employment income are a required topic for the Intermediate VITA exam.    All Intermediate level preparers know that self-employed unincorporated small business owners are required to pay the full payroll tax on their net business earnings on a Schedule SE.

On  Jan 21 the New York Times reported this response from Gov. Romney to a New York farmer complaining about the fact that he--as a self-employed business owner--was required to pay the full payroll tax (employee and employer share) on his business income:


“And with regards to the payroll tax, I’ll take a look at that,” [Romney] said. “I didn’t realize you’re paying that additional — that double taxation — and that’s worth taking a look.”

A few days later, Mr. Romney released his own tax returns and the NYT reported:


Mr. Romney learned to his surprise that self-employed people pay what is essentially both the employer and the employee’s share of their payroll tax obligation.  “I’ll take a look at that,” he told a small businessman who “bird-dogged” him in New Hampshire. But it turns out that he needs to look no further than his own tax return. Mr. Romney paid self-employment tax on this income — both halves of it. The total came to $29,151.

Here is Mr. Romney's 2010 Schedule SE (clicking on the image will enlarge it so you can read it more clearly): 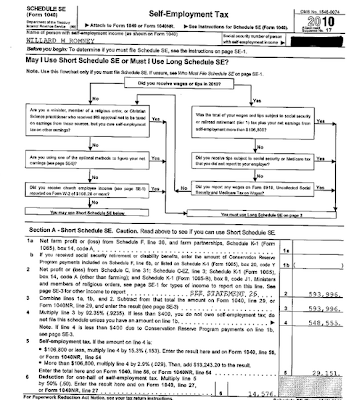 Mitt Romney's Schedule 2010 SE payroll taxes were a tiny percentage of his income, less than 0.2% of his Adjusted Gross Income, and a relatively insignificant part of his total tax bill of $3 million that year. Apparently this is such a minor matter for him that he had not paid much attention to it at the time he signed his tax return underneath the statement: "Under penalty of perjury, I have examined this return and accompanying schedules and statements, and to the best of my knowledge, they are true, correct, and complete."

But for most working Americans, payroll taxes loom large as the biggest single tax they pay.  And--if we use standard and widely accepted CBO incidence methodology--this remains true whether they are self-employed or whether they are working for an employer who remits payroll taxes on their behalf.    Using standard CBO incidence methodology, a typical working American whose income consisted entirely of wages and/or self-employment income totalling less than $106,800 paid about 15% of his income in payroll taxes in 2010 and about 13% of his income in payroll taxes in 2011.

1) Big reason:  the lion's share of his income was not subject to payroll taxation, because it was classified as "investment income" rather than "earned income."
2) Secondary reason:  his actual "earned income" of roughly half a million dollars (from speaking fees and directorship fees) greatly exceeded the Social Security wage cap of $106,800, so most of it was only taxed at 2.9%, rather than the 15.3% rate that applies to income below that cap.

In any case, Governor Romney, since you have promised to "look into" the issue of self-employment taxes for small business, here is a good place to start:  the VITA lesson on how to prepare simple small business tax returns.