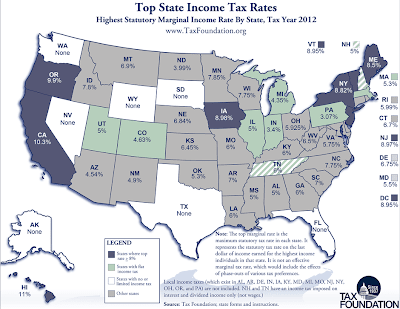 Forbes magazine also released their list of "Ten best cities for jobs" today.  I will list them in order

Hmmm, interesting, with the exception of #10 on the list, Austin, all the top spots for jobs are located in places with relatively high marginal income tax rates.  (And none of the top nine job cities do very well in the Tax Foundation's overall "Business-Friendly Tax Climate" index, either!)

My own state of New York (ranked #49 in "Business-Friendly Tax Climate" by the Tax Policy Foundation) has more cities on the "Best for jobs" list than any other state.  Iowa CPA Joe Kristan grouses about high tax rates in his fair state, but Des Moines is #2 on the jobs list despite being #41 on the "business-friendly" tax list.

And we are not just talking about public sector jobs, either.  Although many of the top job cities are state capitals, in most of them, it is private rather than public sector hiring that is driving job growth.  Here is what Forbes has to say about our own home-turf, the Albany-Schenectady region of upstate New York, #4 on the jobs list:

Albany, like a lot of the cities on this and other lists, is a state capital. But Schenectady has a lot going on as well. GE has its main research and development campus outside of town, is adding 500 employees at its alternative-energy division, and is building a 350-employee battery factory as well. The area is also home to a $4.2 billion chip-fabrication plant in Malta built by AMD spinout Global Foundaries that is expected to provide 1,600 direct and 2,400 indirect jobs.

“We’re a comeback city,” said Chuck Steiner, president of the Schenectady Chamber. And a rich one, too: With a median household income of $59,000, Schenectady ranks above the national average of $51,914.