Economists in love: Is marriage worth the extra tax bill?

Two young economists, Justin Wolfers and Betsy Stevenson,  who met and fell in love in Harvard's PhD program, said no to marriage because of the taxes.

Three decades earlier, my husband and I were also economists in love at Harvard, and we reached the opposite conclusion.

Justin and Betsey explain their reasoning in an excerpt from an interview on the Spouseonomics blog:


Justin: Because Betsey and I earn similar incomes, we would pay a marriage penalty.  The U.S. has a household-based taxation system which subsidizes married families when one person stays home and taxes most people extra if they choose to marry and both work full-time.  The average tax cost of marriage for a dual-income couple is $1,500 annually.  When our accountant ran the numbers for us a few years back we discovered marriage would cost us substantially more.  I love Betsey and all, but is the marriage certificate worth thousands of dollars annually?  I can love her plenty without the certificate.  But this isn’t just about a bean-counter saving his beans.  Truth is, I find it offensive that the tax man treats me differently according to a  very private decision—whether I marry or not.  And so I prefer to remain unmarried, at least in the eyes of the tax man.  And I would also be more sympathetic to the formal legal institution of marriage if it were open to all couples, not just straight couples.
Betsey: It’s not all taxes and politics.  It’s also contracts.  Marriage is a contract between two people about how to organize their lives together.  But modern marriage is a one-size-fits-all contract—a default written by the state legislatures.  It makes no sense to me that I would want to sign the same contract with Justin that you sign with your partner.  So we didn’t take the standard off-the-shelf contract that we call marriage.  Instead, we’ve talked at length about what is important to each of us, and it’s that Betsey-and-Justin-specific agreement that guides our lives together.  And as anyone who has studied divorce knows,  the formal marriage contract doesn’t actually bind our future selves. But I have something far more enduring with Justin than a wedding certificate: We have an amazing daughter, who will bind us together for, well, until death do us part.
You can read more about them in today's New York Times.

Over three decades ago, my husband and I, like Justin and Betsey, also met and fell in love in Harvard's economics PhD program.

The marriage penalty we faced when we married in 1979 was greater in percentage terms than today's academic economists would generally face. (It is easy to use the National Bureau of Economic Research's handy on-line tool, TaxSim, to get a quick estimate of marriage penalties in every year from 1960 to the present. And no--you don't have to be a card-carrying economist to use it. It is available for anyone to use.)

I just used TaxSim to calculate our hypothetical tax bills at the beginning of marriage and academic careers in 1979. Our federal income taxes based on tax law at that time as a married couple were over 22% higher than they would have been if we had gone the Stevenson-Wolfers route.

Had we remained legally single, we would have paid a total of less than $24,000 in federal income tax, but marriage resulted in a tax bill of over $29,000. (All numbers are based on 1979 tax law, but expressed in current 2012 dollars, using the Bureau of Labor Statistics CPI calculator.)

Tax rates were higher on everyone back then and getting married pushed us newly minted assistant professors from the 34% marginal tax bracket to the 43% marginal tax bracket.  Our effective *average* federal income tax rates went from 19% of our AGI to 23% when we married as newly minted assistant professors of economics earning identical salaries.

We got married anyway (the photo above is from our wedding dinner, held at a Szechuan restaurant across the street from the White House on Pennsylvania Avenue--we had a simple and inexpensive but memorable and meaningful ceremony and celebration with just a few friends and family members, less than 20 people were there in total, no special wedding gown for me or tux for my husband, but beautiful hand-dyed batik napkins for the wedding dinner that my mother created from old bedsheets, which we still use on special occasions! The restaurant said they couldn't provide a cake, but we were welcome to bring our own, so my mother baked one herself.  When we asked the waiter for a knife to cut the cake, they brought the only type of knife they had in the restaurant--a butcher's cleaver!  A little unusual, but it still worked fine!)  We look forward to celebrating our 33rd anniversary this summer.

I just asked my husband to be sure he still agrees--we have no regrets!

Of course, the marriage penalty varies according to income and other circumstances (e.g., children, deductions, etc.) and some people actually get a marriage bonus rather than a marriage penalty.  As Justin points out, two-earner couples with relatively equal earnings tend to face a marriage penalty, while couples in which one spouse earns much less than the other tend to get a marriage bonus.  Over the course of a lifetime, many couples may have years when one spouse earns significantly more than the other or vice versa, due to health issues, disability, taking care of children or elderly relatives, as well as years when both spouses have roughly equal earnings.  The Tax Policy Center has an excellent overview of the topic, including a good bibliography to launch further investigations available here.

In percentage terms, the steepest marriage penalties today are actually NOT those faced by high-earning power couples like Justin and Betsey, folks who have the luxury of choices and the money to hire lawyers to make suitable substitute arrangements for marriage, not to mention that they also have a nanny (with a master's degree in education, whom they pay $50,000 per year) as well as a housekeeper and chauffeur (whose credentials and salary were not reported in the New York Times.)

The steepest marriage penalties are those faced by many low-income working single parents, much greater than those my husband and I faced or those that Betsey and Justin faced.   This may explain why we see very few married couples filing returns at our site.   A glance at the Earned Income Tax Credit graph and a little arithmetic make the reason for this immediately evident.  Two unmarried single parents earning minimum wage and working fulltime receive the maximum amount of EITC.  If they marry, they will wind up receiving little or no EITC. 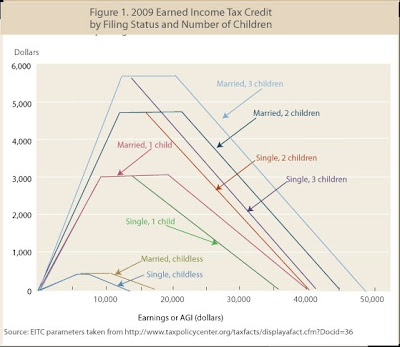 Justin also raises concerns that the federal government does not recognize same-sex marriages.  I agree with him that this is wrong, and I am glad to be able to say that this year, New York State is finally treating all married couples identically thanks to the Marriage Equality Act.  It does introduce some complications for our VITA site, because we need to prepare separate returns (Single and/or HoH filing status) at the federal level and then a Married Filing Joint return at the state level based on a hypothetical but not actually filed federal joint return, but it is worth it to us to treat our clients with equal dignity and respect for their status, at least at the state level.

I also agree with Justin and Betsey that there are many inequities in the tax laws treating married and unmarried couples.  European countries address this problem by doing away with joint returns altogether and requiring all individuals to file separate returns, regardless of marital status.   However, such a move in the United States is complicated by the fact that the US has community property rules for attributing income in some states but not others, as well as the issue of how to deal with refundable credits aimed at low-income households.

Happy Valentine's Day to all, married and single, straight and gay.
Posted by Mary O'Keeffe at 5:53 PM