The price elasticity of soda consumption 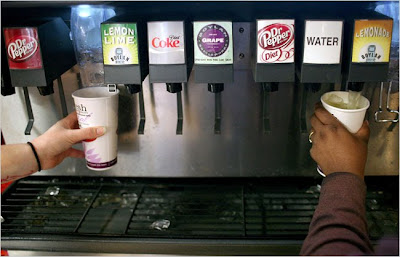 Today's NYT has an article on the soda tax prominently featuring price elasticity, which we'll talk about in class today.

The scientific paper found that a beverage tax might not only raise revenue but have significant health effects, lowering consumption of soda and other sweet drinks enough to lead to a small weight loss and reduced health risks among many Americans.

The study cited research on price elasticity for soft drinks that has shown that for every 10 percent rise in price, consumption declines 8 to 10 percent.

John Sicher, the publisher of Beverage Digest, a trade publication, said that a two-liter bottle of soda sells for about $1.35. At 67.6 ounces, if the full tax was passed on to consumers, that would add 50 percent to the price. A 12-can case, which sells today for about $3.20, could rise by $1.44, a 45 percent increase.

“A one cent per ounce tax would create serious problems and potentially adversely impact sales for the American beverage industry,” Mr. Sicher said.

The New England Journal of Medicine also released an article on the topic this week. The graph from their article shows dramatic increases in soda consumption during a time period in which we know that obesity increased. There is clearly correlation, but causality is much harder to establish. We need to look beyond the simple time series data presented here.