Words like "Social Security" and "convertible bonds" understandably make most college students eyes glaze over. I know mine did, when I was your age.

My dear departed and much beloved mother-in-law once had plans to write a book called Convertible Bonds for Teenagers. She had a notion that convertible bonds could be a great investment vehicle for teenagers, if only they knew what she knew about them. I have to admit that I never fully grasped her logic, and since the book never got written, I guess I'll never understand why she thought they were such a good idea for teens in particular.

I often found myself wondering, however, how you would ever get teenagers to read such a book, even if it turned out that her logic was impeccable and convertible bonds were, in fact, the perfect investment for teenagers. (Maybe put a picture of a flashy red convertible car on the cover?)

Although very few college students make the choice to invest in convertible bonds, almost all of them involuntarily "invest" in Social Security and its cousin, Medicare, via the payroll taxes (a.k.a. FICA) paid on their summer jobs and part-time work.

Most college students, like most Americans, pay far more in payroll taxes than they pay in income taxes, but few of them realize how much they are paying.

If your 2009 income consisted entirely of wages totaling $5,700, you won't owe any federal income tax this year, but you and your employer are on the hook for a 15.3% payroll tax bill.

What could you have done with that money if it hadn't gone to pay your payroll taxes?

Or you could have followed my mother-in-law's advice and invested the money in a convertible bond fund!

But you didn't get to spend it on any of those things, because the money went to the federal government in payroll taxes.

So what are you getting in return?

An entitlement (which is not a legally binding contract, unlike convertible bonds!, but rather an implicit social contract or expectation) that you will eventually be able to collect Social Security and Medicare benefits at some possibly distant point down the road. More concretely, much of your payroll tax money went to pay the current generation of retirees, and a small amount was set aside in a so-called "trust fund" to help pay for future retirees' benefits. (The trust fund is invested in US Treasury securities, and effectively reduces the reported deficit.)

Are those payroll taxes a good deal for you?

For your grandparents' generation--my mother-in-law's generation, it was a very good deal.

For your generation, well, let's just say that convertible bonds might have been a better deal.

But Congress didn't have to write a book to sell you on the idea of "investing" in the Social Security system. They just passed a law mandating participation in 1935, long before you were born. It seemed like a good deal at the time--and it was a good deal for everyone who was alive, especially those old enough to vote at the time Social Security law was passed by overwhelming margins in both houses of Congress. 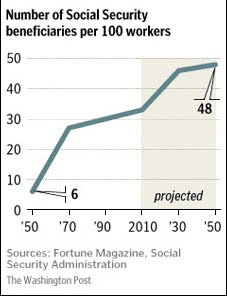 The graph above accompanies a very readable article in the Washington Post summarizing the tough demographic realities facing Social Security, Deals: A flimsy trust, Why Social Security needs some major repairs. As the graph shows, in 1950 there were 16 workers paying into the system for every retiree collecting. By the time you retire, there will only be 2 workers paying into the system for each retiree. It will indeed take some costly and politically difficult repairs to keep Social Security viable.

The graph below from Chapter 4 of Gruber summarizes the overall intergenerational equity accounting. We'll talk more about this in class tomorrow. 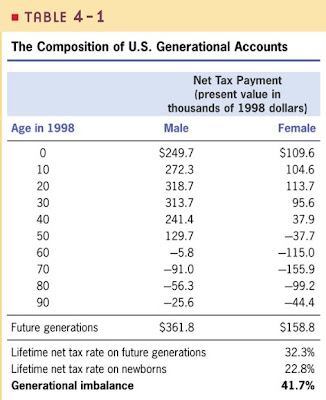