Why the IRS refuses to spell my name correctly 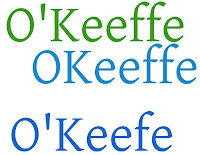 My name survived the immigration authorities, but the IRS refuses to spell it correctly.

I'm proud to be a double-F O'Keeffe, like the artist Georgia, also a double-F O'Keeffe, whose name is also frequently misspelled. I like to think that we double-F American O'Keeffes were the ones with more literate immigrant ancestors who actually insisted on correct spelling in their immigration documents. (More likely, it was a matter of luck, rather than literacy, however.)

My last name was lucky enough to survive those immigration officers. It is spelled correctly on my birth certificate, my passport, and my Social Security card.

For decades, the IRS also spelled it correctly.

But about a decade ago, the IRS decided to stop spelling it correctly. (Fortunately, the bank still allows me to deposit refund checks, despite the IRS refusal to spell my name correctly.) It's not the double-F in my name that gives the IRS trouble, however. It's something else altogether.

I am very fond of my surname. It's my maiden name, which I got from my dear departed dad, which I've happily kept all my life, even though my husband and I celebrated our 30th anniversary this past summer!

My dad's full name was Richard Bennett O'Keeffe, Sr, and he proudly traced his ancestry back on both his parents' side. On his father's side, the O'Keeffe stemmed from an Irish immigrant who came over during the potato famine of the 1840s, my dad's great-great-grandfather. All I know about him was that he was a cemetery caretaker in Virginia--we have a letter commending him for his good work. My dad's mother, by contrast, was a Bennett from a large family (15 siblings!) in southern Maryland, and they could trace their ancestry all the way back to their forebear Richard Bennett, the first, last, and only Puritan governor of Virginia (1652-1655). My father was named after that Richard Bennett, and the Bennett name lives on as the middle name of one of my daughters.

But I digress. I'm rather particular about the correct spelling of my last name, which is almost always misspelled. When I was a child, my parochial school had very large classes (56 students per classroom from K to 8) and, therefore, on each Valentine's day each of us received 55 mandatory valentines from our classmates. In the early years, it seemed that my name was spelled 55 different ways on those handwritten valentine envelopes (O'Keeffe, O'Keefe, O'Keefee, O'Keesse, O'Keith, O'Keef, Keefe, and more variations along those lines.) Given the age of my classmates, and the fact that they were required to write out 55 envelopes, it's not too surprising that they didn't take too much care. After all, scholars say that even Shakespeare was erratic in the spelling of his own name.

Precisely correct spellings mattered little in those elementary school days, however. All the spellings were close enough that they reached their intended destination. There were, after all, only 56 students in my class. About half of the girls seemed to be named "Mary" but none of the other Marys had a surname anywhere close to mine.

Precisely correct spellings make a lot more difference in these digital days. One letter astray can result in a total mismatch, with all kinds of ensuing identity confusion problems. Many email systems I have used assign email addresses based on last name and a correspondent who misspells my name in that address may not understand why his emails are not reaching me. As a result, whenever possible, I encourage my correspondents to use my alternative addresses in gmail or yahoo, which have nothing to do with my last name, and which are therefore much easier to remember and spell correctly.

However, it shouldn't be a problem for me. As mentioned above, I've kept my maiden name for my entire life, so I have a single consistent Social Security record. I started filing tax returns as a single person in the 1970s. The IRS had no problem digesting my tax returns then. In 1979, I got married and started filing joint returns with my husband, continuing to use my maiden name. No problems at first. In the early 1990s, we switched from doing our tax returns by hand to using computer software. Still no problems for quite a few years.

Then, out of the blue, about 10 years ago, after trouble-free joint return filing for twenty years of our married life, my husband got a letter from the IRS asserting that he was ineligible to file a joint return because the name of his spouse of the tax return did not match up with the spouse SSN in Social Security records. As far as the IRS was concerned, his "spouse" listed on the tax return did not exist, and the IRS was threatening to change his filing status to single and bill him for extra tax.

Well, of course, the first thing we did was to go to our files to look at our copy of our joint tax return in question. Of course, my name and SSN were listed correctly on our tax return, and it was exactly the same spelling as we had used on all previous years' tax returns. (In fact, our tax prep software had automatically pulled that information verbatim from prior year's returns, which had previously been accepted without question.) And I pulled out my Social Security card to double-check it. Sure enough, Social Security had spelled my name correctly on my card, issued back when I was a teenager. Everything looked letter perfect.

So why was the IRS computer suddenly deciding that my name and SSN didn't match? It was a total mystery to us at the time, but we wrote back to the IRS, enclosing a copy of the first page of our tax return, along with a copy of my Social Security card, and a copy of our marriage license, and we heard nothing further from them, so I guess they eventually decided that everything was in order after all. We have filed joint returns, unchallenged by the IRS, ever since.

In 2005, while I was preparing to become a VITA site coordinator, I finally got some confirmation for my "apostrophe indigestion" theory.

VITA volunteers get a special manual (Pub 4012), which very helpfully tells us that there are certain special exceptions to the "Spell the name exactly as it appears on the Social Security card" rule. One of those exceptions is for apostrophes. Apparently the IRS software can't deal with apostrophes, so you are supposed to leave apostrophes off your 1040. Page 3 of Tab #1 of the Pub 4012 provides the helpful example that a person with a Social Security card reading "John David O'Willow" should be entered as "JOHN D OWILLOW" in tax software.

I have no idea why the IRS computers suddenly stopped being able to digest an apostrophe, nor why they don't bother to explain this fact to ordinary hapless taxpayers.

Of course, George Bernard Shaw would certainly approve of the IRS refusal to deal with apostrophes. He famously disliked apostrophes, calling them "uncouth bacilli." It was part of his general campaign for simplifying spelling.

The spelling reform movement was even stronger in the US than in England. One of my maternal ancestors, Noah Webster (of dictionary fame) was an early proponent--which brings us back to those American immigration officers who stripped the redundant F's from hapless O'Keeffes wanting to enter the country.

Illustration credit: image above was created in http://www.wordle.net/create
Posted by Mary O'Keeffe at 9:03 AM