Wondering about your taxes after you graduate? 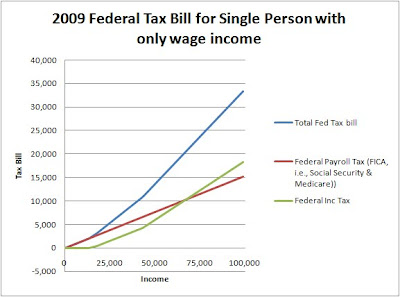 I used the National Bureau of Economics Research's handy-dandy TaxSim simulator to figure out the 2009 federal tax bill (income tax, payroll tax, and total federal tax) for a single person with no dependents and only wage income. The result is the graph above. 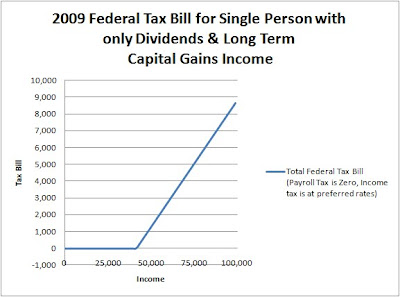 Of course, as I pointed out in class, if that same single person with no dependents could figure out a way to have his income arrive in the form of dividends and long-term capital gains, he would pay ZERO in federal payroll tax and a much lower federal income tax as well. With 40K in income, such a person would have a zero dollar total tax bill. At 100K in income, the total tax bill for such a person is still less than 9% of income.

If Congress gets serious about addressing the deficit and/or funding expanded health care programs, many taxpayers can expect their rates to rise, and the highly preferential rates on dividends and capital gains are likely to be a prime target. If Congress does nothing, the graphs for 2010 will look much the same as the 2009 graphs I've shown above. However, many tax rates will automatically increase substantially in 2011, when the Bush tax cuts are set to expire, so Congressional inaction means your tax rates will go up for sure in 2011.

Of course, if you're budgeting for your total tax bill, you should also figure in state taxes as well. State income taxes in some states have top rates in the 10% range. You'll also be paying sales taxes in most states. If you don't own a home, you won't pay property taxes directly, but when we do tax incidence analysis, you'll see that your rent is likely to reflect some of those property taxes indirectly.
Posted by Mary O'Keeffe at 4:02 PM