Your tax dollars at work 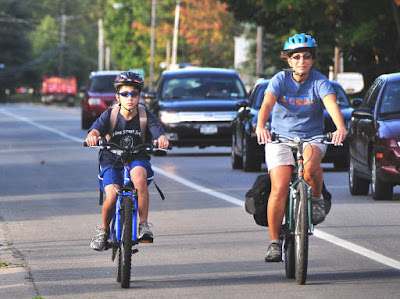 The Albany Times Union reported last week that a local school district called a New York State trooper to the school to turn a 12-year-old student away from the school. The boy's offense? Riding his bike to school, accompanied by his mother on her bike, in violation of the school's rule, which forbids students to walk or bike to school. It's not against state law to bike or walk on Maple Avenue, but it is against school policy.

SARATOGA SPRINGS -- Seventh-grader Adam Marino is getting a firsthand lesson in civil disobedience.

The 12-year-old and his mother, Janette Kaddo Marino, are defying Saratoga Springs school policy by biking to Maple Avenue Middle School on Route 9. The Jackson Street residents pedal more than four miles together each way to the middle school on nice days despite being told not to by school officials and police.

"I guess you can say that we continue to do what we feel is our right," Kaddo Marino said recently. "We feel strongly we have a right to get to school by a mode of transportation we deem appropriate."

Riding his 21-speed Giant mountain bike to school benefits Adam Marino's health and the environment, his mother says, and Adam believes it makes him a better student. "It would be really nice if it got changed," he said of the school policy.
...

When the pair stuck with their plan, they were met by school administrators and a state trooper ....

In response, members of an advocacy group, Saratoga Healthy Transportation Network, rallied around the mother and son by accompanying them on their rides to school. They go an average of twice a week. Mom rides to the school to join her son coming home.

Apparently, taking the school bus or getting a car ride to school are the only methods the school currently considers "safe." When the school opened 15 years ago, it actually had bike racks. The bike racks have since been removed. The school is located on a reasonably busy road, but the speed limit is 30 mph. There are crosswalks and wide shoulders, but no sidewalk or designated bike lane. I've walked along the road myself in the past. My own children were homeschooled from ages 8 to 18, but they volunteered as mentors and coaches in public schools, and they sometimes walked to their volunteer assignments along similar roads. I would have had no hesitation about allowing them to walk along Maple Avenue when they were Adam's age.

Nothing is perfectly safe. It's interesting for me to reflect on my own childhood. Starting at the age of 6, I walked to school, about a dozen city blocks along busy Connecticut Avenue in Washington DC. In first grade, my parents had me walk with another 6-year-old who lived on my block and her third grade older sister, Ria. The following year, I was deemed old enough to walk by myself. I still remember the heady feeling of empowerment. At that age, I was also allowed to walk to the public library by myself, to run errands for my mother at the grocery store, and to walk to church by myself. The year after that, my somewhat rambunctious brother started attending my school as a first grader, and I was put in charge of supervising him. Later on, when he was about Adam's age, my brother assumed a position of responsibility as a "Patrol Boy," assigned to supervise younger children crossing a street near the school during lunch time. (Only children who lived very close to the school were allowed to go home for lunch.) Rick was an entrepreneur and started up his own "catering service," accepting commissions from school-bound classmates to pick up candy at the candy store located near his Patrol Boy post.

The candy may not have been so healthy, but walking to and from school surely was healthy. It formed a life-long healthy habit that we still enjoy decades later.

The enrollment of our K-8 school was close to 1,000 children. Almost all of the children walked to and from school. (There was one ambassador who notoriously had his children chauffeured in a limo with diplomatic plates: DPL #1, but the rest of us hoofed it.) Patrol boys were stationed at nearby intersections, within a couple block radius of the school, but most of us crossed many busy streets on our own long before encountering any patrol boys. Our parents trusted that we had good "Guardian Angels," and I guess we did. In the eleven years during which I and/or one or more siblings attended the school, I do not recall ever hearing any cautionary tales of anything untoward happening to a child traveling to or from school.

Nothing is perfectly safe. We were lucky. Bad stuff happens, no matter how your kids go to school. Biking, walking, driving, none of those are risk-free. The school bus isn't 100% safe either. Kids occasionally get abducted waiting at school bus stops. A curious six-year-old girl opened the emergency exit on my daughter's school bus, just for the heck of it--while the bus was in motion! Children sometimes fall asleep in the back of a school bus and don't get off the bus. The driver is supposed to inspect the bus to make sure it's empty before locking it up, but sometimes they are careless and don't look carefully enough. There have been incidents of forgotten disabled children trapped in the back school buses for hours, without anyone realizing it. At least once, it happened in freezing temperatures. I've read newspaper accounts of school bus drivers in our area arrested for DUI with children on board their buses.

All things considered, however, the National Academy of Sciences says that school buses have by far the lowest fatality rate for travel to and from school. But the most dangerous alternatives are not walking and biking to school. The most dangerous alternative, statistically, is for children to ride to school driven by a teenager in a private car, which has 13 times the fatality rate of taking the school bus.

The Saratoga Springs School District does not forbid parents to drive their children to school, nor do they forbid high school students from driving their younger siblings to school, even though that's statistically much less safe than walking or biking.

Many parents around here do drive their children to school--for a variety of reasons. It's bitterly cold in the winters here, school starts early, and school bus routes are often surprisingly long and circuitous for children who live close to school, so some children are waiting at bus stops before sunrise. It's a 2-minute car drive or 10-minute walk from our house to our local public school, but the school bus route was laid out one year so that kids in our neighborhood had to be out at the bus stop 45 minutes before school started, then take a 30 minute ride all around town in order to be dropped off at school.

One mother told me that the city of Schenectady assigned her seventh grade son to a school bus stop 1.9 miles from their home, but his school is only a 2.0 mile walk (in a completely different direction!) On top of that, his assigned school bus stop is in a much more dangerous neighborhood than either his home, his school, or any neighborhood directly between his home and his school.

It's completely understandable that parents may want to drive their children to school, at least occasionally, even though that is statistically less safe than having them take the school bus to school. And statistically, biking or walking to school are safer than traveling in a private passenger car to school. But no school district I know bans parents from dropping their children off at school in a private car.

New York State ought to have higher priorities for New York State troopers than sending them to schools to enforce school district policies that overreach their responsibilities.

And, as long as the government is slinging around "stimulus money" on some dubiously needed roadwork projects around here, I'd like to some of the money going towards more sidewalks and bikepaths!

More kids walking and biking to school is a long-term investment in a healthier future!
Posted by Mary O'Keeffe at 12:17 PM