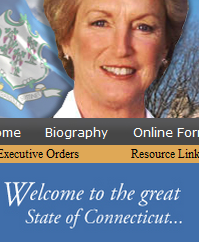 Last month, the Albany Times Union published this letter from Connecticut's governor to the "hedgies" (i.e., the folks who run hedge funds) in New York.

Dear Mr. Selby and Members of the Roundtable:

As lawmakers in Albany consider a proposal to vastly increase the tax liability of hedge fund professionals who work in New York – many of whom have already wisely decided to live in Connecticut – I would like to convey a very simple, yet heartfelt, message: Connecticut welcomes you!

As Governor, I stand ready to do anything possible to assist you. Our economic development professionals stand ready to help you find convenient, modern and prime office space. Our relocation specialists stand ready to aid your families in locating great homes and good schools. Our quality of life is second to none – one need only ask a colleague who already makes Connecticut his or her home about the many pleasures of living in our state.

And I can assure you that Connecticut has been pursuing and will continue to pursue a much more enlightened approach to job creation and retention and economic development.

Packing up and moving is never an easy decision – I understand that. However, I also understand that short-sighted decisions have long-term consequences. That understanding is a hallmark of good decision-making in any business. I encourage you to consider the attractive options Connecticut can offer, and invite you to contact my office directly to explore the matter further.

Connecticut Governor M. Jodi Rell's dinner date with New York hedge fund managers is still on, despite the fact that a controversial proposal to raise taxes on nonresident hedge-fund managers has been dropped.

Tim Selby, president of the New York Hedge Fund Roundtable and a partner at Alston + Bird LLP, said what the governor described as an "intimate, direct and private" dinner on Aug. 2 at a waterfront restaurant in the affluent suburb of Darien will go ahead as planned and he has signed up for it.

"I don't know that you can conclude there is no threat from the New York legislature until the budget has been approved. Moreover, there is no basis to conclude that the New York State legislature will not reintroduce the proposal next year," he said. "The governor was kind enough to extend the invitation and I think we would be remiss to not meet with her to hear what she has to say."

Rell has been actively courting New York hedge fund managers since New York Gov. David Paterson proposed higher taxes on fund managers who live outside New York but work for funds that operate in the state.

Right now, nonresident hedge-fund managers often don't pay New York state tax on carried interest, which is usually treated as a capital gain. The proposal would treat carried interest as services income, which is taxed at ordinary-income rates rather than the lower capital-gains rate.

Keen competition from Connecticut and opposition from the New York hedge-fund industry seemed to have forced Paterson to yield. In an email to Dow Jones Newswires Friday, Paterson press secretary Morgan Hook said: "That provision was removed."

Paterson has been quiet on the matter since the provision was dropped July 13 when he submitted a revised revenue bill to the legislature.

It is worth noting that both Connecticut Governor Rell and New York Governor Paterson will be out of office in January, because both have declined to run for re-election this fall. Thus, neither is in a position to make long-term commitments about future tax laws.

The issue in question--whether the compensation of hedge fund managers for their labor should continue to be treated more favorably than other kinds of labor compensation, e.g., wages--is also the subject of considerable debate at the federal level.

Although hedge fund managers might be willing to cross state lines for preferential tax treatment, it is unlikely that many of them will want to move out of the country for tax reasons. After all, most other industrialized countries have even higher tax rates than we do.
Posted by Mary O'Keeffe at 9:13 AM