How many pages in the tax code?

Does anyone really know?

A few days ago, I quoted a statement from Senator Baucus, Chair of the Senate Finance Committee, to the effect that there are 70,000 pages in the Tax Code. I figured he should know, since everything in the tax code must go through his committee to become law.

However, Peter Reilly, a CPA from Massachusetts with 30 years of experience, commented on that post as follows:

Where does he get 70,000 pages ? I've got a two volume CCH set that includes all sorts of extra notes and it is less than 10,000 pages. Mainly I work on-line so it's otherwise hard to judge.

Good question! As near as I can tell, Senator Baucus' source for the 70,000 page figure appears to be an article in The Economist, a magazine published in the UK. That article didn't go into much detail.

But journalist Kay Bell had a great post on her blog earlier this year that provides a lot of helping tracking down the support for Senator Baucus' reference to "70,000 pages" in the Tax Code. Her post has excellent graphics (a small version is below: go to her blog for more details.) 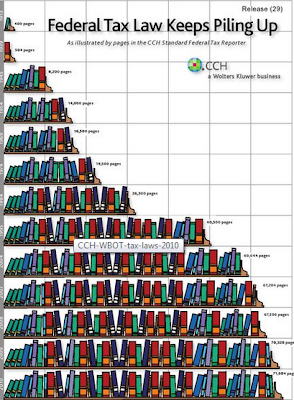 It appears that Senator Baucus was not being as careful as he should have been. As CPA Reilly realized, the actual "Tax Code" itself is much less than 70,000 pages. (Of course, the number of pages is going to vary depending on factors such as the type font size, margins, etc., but I have not seen any copies of the actual Tax Code that had more than 10,000 pages.)

What is 70,000 pages is not the Tax Code itself, but rather the venerable Commerce Clearing House product, "The Standard Federal Tax Reporter," a collection of looseleaf binder publications updated every two weeks which includes the continuous changes to the Tax Code along with a lot of interpretive and clarifying material.

As CPA Reilly notes, if you just want the Tax Code "straight," with no interpretation or explanation, CCH will happily sell you a much smaller two volume set of books that contains the unabridged complete text. Their current version, slated to be available in December, in time for the 2011 filing season, has less than 5,000 pages.

Even so, that is a lot! Here's a free on-line website with the text of the Tax Code maintained at Cornell University website. As you can see, the Tax Code as Congress writes it is pretty inscrutable and rather disorganized, which is why professionals feel the need for so much supplementary reference material.
Posted by Mary O'Keeffe at 4:31 PM