What do plumbers, politicians, and professors have in common?

Among other things, they frequently do not communicate clearly or accurately about the distinction between "income" as most people use the term in everyday careless language and "taxable income" as tax law defines it.

This leads to a lot of unnecessary distress and diatribe. People are simply not talking about the same concept unless they define their terms carefully, and our tax system has so many different concepts of "income" that it is very easy to get confused. (There is "Total income" on line 22 of your 1040, but even that "Total" excludes many items we common consider to be pretax income, and that would certainly be included in any kind of comprehensive measure of income. Then there is Adjusted Gross Income (AGI) and Modified Adjusted Gross Income (MAGI!) It turns out that there are many different definitions of MAGI, depending on the context. Then there is "Taxable Income" and "Alternative Minimum Taxable Income (AMTI)" and "Earned Income" and "Unearned Income" and "Ordinary Income" and on and on and on.)

Joe the Plumber famously worried that the Obama administration was going to increase his taxes on a plumbing business that he thought might have income of "$250,000 to $280,000." In fact, the taxable income of such a business would almost surely be well below the $250,000 threshhold in taxable income.

Unfortunately, the then-candidate Barack Obama did nothing to allay Joe's distress by distinguishing between taxable income and "revenues," as he phrased his reply to Joe:

More recently, a professor at a major national law school stirred up a national firestorm in the blogosphere last week, when he objected that it was unfair to tax his family that made "not much more than $250,000" as if they were millionaires.

Observation 1) A family of five with "not much more than $250,000" in pretax income will surely have taxable income lower than $250,000, especially given the circumstances described by the professor (a substantial amount of itemized deductions)

Observation 2) A family with TAXABLE income that is barely above the $250,000 taxable income threshhold will NOT face the same additional tax as a millionaire, because the portion of their income subject to the higher added tax rate proposed by the Obama administration is only the DIFFERENCE between their taxable income and $250,000.

Observation 3) For many families with taxable incomes over $250,000, the Obama administration proposal will actually reduce their taxes because his proposal reduces their Alternative Minimum Tax. (Source: Tax Policy Center calculator.)

Observation 4) Given the way marginal tax rates work, it is impossible to collect a significant amount of additional tax revenues from the millionaires unless one starts phasing in higher marginal rates at incomes well below one million dollars.

Observation 5) The professor's protest about not wanting to be taxed unfairly compared to those he sees as "truly rich" has foundation in fact, but he should not blame the Obama administration for this phenomenon. It is quite possible that Joe the Plumber and the law school professor have been paying a higher percentage of their income in federal taxes than many millionaires. President Obama is a millionaire, but he paid a larger percentage of his income in federal taxes than many of the richest 400 taxpayers. (In 2009, he and his wife filed a tax return reported $5.6 million in total income and paid about a third of that in taxes.)

The tax breaks for the rich are long-standing and deeply embedded in our tax code, as you can see from the graph below from the Center for Budget and Policy Priorities. 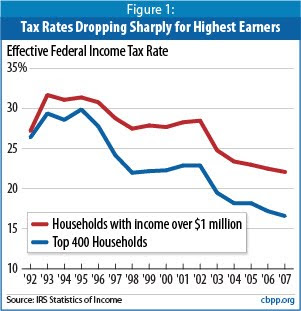 Observation 6) We ALL desperately need a SIMPLER tax code so public debates about tax policy can cut to the truth of the actual policy proposals, and people do not wind up inadvertently wasting time by communicating at cross-purposes, referring to different concepts of income without clearly distinguishing among them.
Posted by Mary O'Keeffe at 8:54 AM