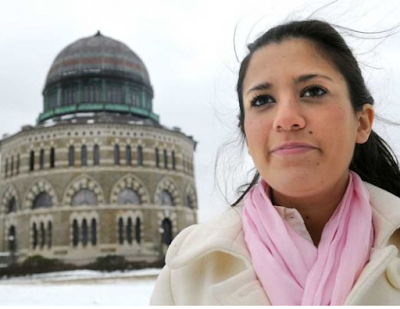 Senator Schumer, the original sponsor of the American Opportunity Tax Credit, a tuition tax credit worth up to $2,500, came to town last week to raise awareness of the credit at a press conference held at Schenectady County Community College. Pictured above is Rachel Colman, a Union College senior interviewed by the Times Union, who told their reporter that she first learned about the tax credit when she interned for Senator Schumer last summer. She said her mother already knew about the credit thanks to her tax accountant, but not all families are fortunate enough to have tax advisors who are knowledgeable about the credit.

As Senator Schumer put it:

"The bad news is that far too many families don't know that this credit exists, but the good news is that it's not too late to put that cash in your pocket, even if you forgot to take the credit last year,"

"Too many middle-class families are not getting the benefit of this credit because they don't know about it, or their tax preparer failed to tell them about it," he said. "It's like there's a dump truck full of $100 bills sitting across the street."

Tax law is so confusing and labyrinthine and the rules are constantly changing--perhaps it is not surprising that many working families do not take advantage of the credits available to them. There are so many different tax benefits for education, and it can be hard for many families to figure out which one is best for them. There are also decisions to be made as to whether it is better for the child or the parent to take the tax credit. Even the National Taxpayer Advocate, Nina Olson, a tax lawyer and long-time former tax preparer herself, has said in the past that she has had difficulty figuring out which education tax benefit to use for her own college son.

In the past, many families had incomes too high or too low to benefit from tuition tax credits. The American Opportunity credit raised the income ceiling: married taxpayers making up to $160,000 may not realize they are now eligible for the full amount of the credit. In the past, the federal tuition tax credits were not refundable, which meant that they had little or no benefit for low-income taxpayers with no tax liability. The partial refundability of the current American Opportunity Credit means that even taxpayers with no federal income tax liability can benefit from it.

The American Opportunity tuition tax credit and other tax benefits for higher education are an important topic in Intermediate VITA tax law, so we will be tackling that next week, as soon as you finish the Basic tax certification exam.

For those of you who are already solid on Basic tax law, this is a good time to work through the VITA tutorial on Education tax credits, which you can find here. We will also discuss the late-breaking tax law change that extended the tuition tax and fees deduction, which may be a better deal than tuition tax credits in certain cases. An important concept to bear in mind: "the no double benefit" rule.

The IRS annual Pub 970, Tax Benefits for Education, is invaluable reading for parents and students alike. If your family discovers that you missed out on a tuition tax benefit to which you were entitled last year, it is not too late to file an amended tax return to claim it.
Posted by Mary O'Keeffe at 3:31 PM